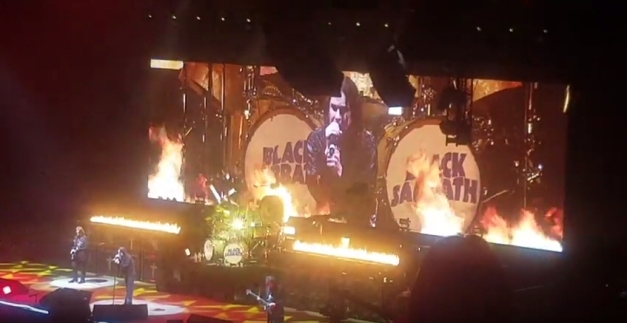 Saturday, February 4th, BLACK SABBATH members Ozzy Osbourne, Tony Iommi and Geezer Butler, with their touring drummer Tommy Clufetos, wrapped up their almost 50-year career with the final show of “The End” tour in their hometown Birmingham, England at the Genting Arena. Fan-filmed video footage from the show can be seen below.

BLACK SABBATH performed the following setlist of the greatest classics, for one last time:

Ozzy Osbourne‘s right hand man in BLACK SABBATH bassist Geezer Butler got busted for a bar fight, and spent a night in jail, according tmz.com.

Sources tell us Butler was in a bar at the Furnace Creek Ranch in Death Valley Tuesday … when the brawl broke out — and apparently the ol’ Geezer‘s still got some fight left in him.

Inyo County Sheriff’s deputies, clearly believing the Butler did it … arrested the 65-year-old for battery, vandalism, and disorderly conduct.

Butler famously wrote most of Sabbath‘s lyrics … while Ozzy got all the glory as the band’s frontman.

Has he lost his mind? Can he see or is he blind?

Who knows? But cops tell us Butler was released from jail Wednesday morning after drying out.

BLACK SABBATH’s Tony Iommi: “If 13 Does Turn Out To Be Our Last Album, Then It’s A Great Way To Go”

BLACK SABBATH’s Ozzy Osbourne, Tony Iommi and Geezer Butler are featured in a new interview with Matt Munday at The Independent. An excerpt from the story is available below:

Iommi, as his iron handshake testifies, is in robust health again. I do not raise the subject of his treatment for lymphoma directly with him, for fear of appearing glib, and he accepts my compliment that he is looking well without further comment. However, speaking on the phone the following day, Butler raises the subject and says that “we all thought he was on his way out at one point. He’d lost tons of weight and his hair was gone. I think the album took his mind off all the radiation and chemo. And then, as we were recording, he seemed to bloom.”

Butler believes that Iommi was the main difference between this album and Sabbath’s last (aborted) attempt in 2001, which yielded only six songs that were “just not good enough.”

“I didn’t think we’d ever do an album together after that,” Butler says. “Which is why we took so long. But this time Tony had got his own studio at home, and he had all these incredible riffs. The hardest part is to take an average riff and form it into a song. As soon as we heard these riffs, we knew Tony was back on form. We knew straight away it was going to work.”

Will 13 be their last album? It ends with the sound of thunder and a tolling bell, which is how their very first LP began, though this was Rick Rubin’s idea. “We’re very pleased with the album,” Iommi equivocates. “Though if it does turn out to be our last, then it’s a great way to go.”

Go to this location for the complete story.

Black Sabbath Live… Gathered In Their Masses has entered the Top Music Videos chart in the US at #2, selling approximately 9,000 copies in it’s first week of release. In Canada, the title lands at #4 on the SoundScan DVD chart.

Black Sabbath’s triumphant 2013 tour – which kicked off earlier this year in Australia – can now be seen by fans around the world via Black Sabbath: Live… Gathered In Their Masses (Vertigo/Republic).

‘War Pigs’
‘Into The Void’
‘Loner’
‘Snowblind’
‘Black Sabbath’
‘Behind The Wall Of Sleep’
‘N.I.B.’
‘Methademic’
‘Fairies Wear Boots’
‘Symptom Of The Universe’
‘Iron Man’
‘End Of The Beginning’
‘Children Of The Grave’
‘God Is Dead?’
‘Sabbath Bloody Sabbath’ (Intro)/’Paranoid’

Clips for ‘War Pigs, ‘End Of The Beginning’ and ‘Loner’ can be seen below:

Stone Sour‘s House of Gold & Bones Part 2—voted one of the best albums of the year by Revolver—is available everywhere now. Get both volumes of the set in the Roadrunner webstore for just $19.99!

Check out video footage below:

BLACK SABBATH Guitarist Tony Iommi – “The Tensions Over The Years Have Mainly Been About Business; It’s Not Been Personal At All”

Source: Bravewords.com
BLACK SABBATH guitar legend Tony Iommi is featured in a new interview conducted by Glenn BurnSilver for the Phoenix New Times. An excerpt from the discussion is available below:

Q: How is playing together–recording together–after so many years of tension and not being in the studio? The last album with the original lineup was in 1978… Ozzy was booted out in 1979…

Iommi: “Tensions? The tensions over the years have mainly been about business. It’s not been personal at all. We always got on well on a personal level. It’s been going really good.

It’s just a different attitude now. When we got back together to record this album everybody had a different attitude toward what we were doing this time. We wanted to make an album together. We all really appreciated each other and respected each other. That’s really the only way to go into it–a full band commitment–and everybody was ready to put everything into it.

We did try back 12 years ago, and nobody could settle on it then. It wasn’t the right time, there were to many things going on. Ozzy was doing MTV, so it just didn’t work then. We weren’t going to do it until everybody was fully committed, and that was this time. Rubin was interested in doing the album (in 2001). We played him some tracks but that’s as far as we got with it. We pulled the plug on it. We never got into the studio. We’d just played him some tracks.”

Bassist Geezer Butler posted the following message: “At the Toronto gig last night, we were presented with a double gold disc award for sales of the latest album, 13. Then we were presented with official Toronto Maple Leafs jerseys, plus it was an absolutely fantastic show. Thank you Toronto, thank you Canada.”

Black Sabbath’s live itinerary can be found at this location.
Geezer uploaded the following photos at his Facebook page: