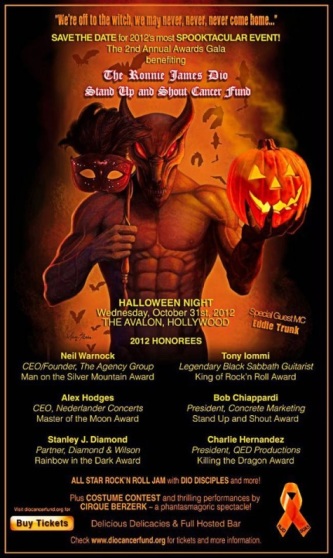 The Ronnie James Dio Stand Up and Shout Cancer Fund will host its second Awards Gala on Wednesday, October 31 at The Avalon in Hollywood, California to raise funds for its commitment to cancer prevention, research and education. Founded in memory of Ronnie James Dio, the world-renowned voice of DIO, RAINBOW, BLACK SABBATH and HEAVEN & HELL who died of gastric cancer in May 2010, the Dio Cancer Fund has raised more than $500,000 in its short history.

Awards named after songs written by Ronnie James Dio will be presented to honorees in recognition of their support of the Fund‘s important work. Eddie Trunk, host of VH1 Classic‘s “That Metal Show”, will once again serve as special guest emcee, with this year’s King Of Rock ‘N’ Roll Award going to Ronnie‘s BLACK SABBATH and HEAVEN & HELL bandmate Tony Iommi, who in january announced he was battling lymphoma. A number of ticket options are available, from as low as $200 all the way up to $12,000. Guests will enjoy a costume contest, both silent and live auctions, gourmet food, a fully hosted bar and a performance by DIO DISCIPLES, which is made up of ex-DIO members Rudy Sarzo (bass), Simon Wright (drums) and Craig Goldy (guitar) along with former JUDAS PRIEST and ICED EARTH vocalist Tim “Ripper” Owens.

With nearly five decades of worldwide success and album sales in the tens of millions as the front man of ELF, RAINBOW, DIO, BLACK SABBATH, and, most recently, HEAVEN & HELL, Ronnie James Dio grabbed the mic, took the stage, and led a movement whose influence resonates to this day.

“Ronnie was a very special person,” Wendy Dio said in a December 2011 interview. “Not only was he an amazing vocalist, amazing songwriter, he was an amazing person as a human being. He loved people. He loved his fans. He listened when people spoke. A lot of times people don’t listen. He listened. He remembered people’s names. He remembered their children’s names. He was just a very, very special person. He was taken too soon from us. . . I don’t think anyone’s ever said a bad word about Ronnie except for [former DIO and current DEF LEPPARD guitarist] Vivian Campbell. [Laughs]”

At about noon today, Alice Cooper delivered the graduation commencement speech to 600 rowdy and dangerous graduates from the Musicians Institute in Los Angeles. He opened by joking, “First of all, the fact that I am here as your keynote speaker raises a lot of red flags. It show’s an obvious lack of judgment on your part.” Alice also received an honorary doctorate from the Musicians Institute, the second doctorate award he has received in his career. Cooper said of the honor, “One more of these and I can write prescriptions”.

Other key words from his speech:

“Mediocrity is your greatest enemy”.

“If you’re going to be in this business, don’t be afraid to go out on that limb as far as you can”.

“Apparently, chickens don’t fly as much as they plummet”.

“So there I was with a loaded snub nose Smith and Wesson 38 aimed at Elvis Presley. The little devil on my shoulder said, ‘Kill him.’ The angel the other shoulder said, ‘No, just wound him’… ”

Posted by tarjavirmakari on April 7, 2011
Posted in: News. Tagged: Hollywood, new performance footage, The Mirror And The Ripper, video, volbeat. Leave a comment

Danish VOLBEAT new performance footage “The Mirror And The Ripper” – Live from House Of Blues, Hollywood CA – April 6th 2011, can be viewed below.

Video footage of Norwegian metallers KEEP OF KALESSIN performing the song “The Awakening” live at the Key Club in Hollywood, California on November 16, 2010 during the band’s U.S. tour with NILE, EX DEO and PSYCROPTIC can be viewed below. Source: Blabbermouth.net