Canadian metal legends VOIVOD recently performed at Hellfest in Clisson, France, which ran from June 21st – 23rd. Pro-shot footage of the band being joined by Phil Anselmo (DOWN, ex-PANTERA) for ‘Astronomy Domine’ and former bassist Jason Newsted (NEWSTED, ex-METALLICA) for ‘Voivod’ has been posted and can be viewed below:

Darko Zivkovic of the Serbian Metal Portal conducted an interview with former METALLICA, VOIVOD and FLOTSAM AND JETSAM bassist and current NEWSTED frontman Jason Newsted prior to NEWSTED‘s June 25 performance at Kombank Arena in Blgrade, Serbia as the support act for SLAYER. You can now listen to the chat using the SoundCloud widget below.

Asked if he has ever heard the two METALLICA albums that were recorded after his departure from the band — 2003’s “St. Anger” and 2008’s “Death Magnetic” — and what his opinion was of them, Jason said: “I heard ‘St. Anger’ one time — really, literally. My wife, who at the time was my girlfriend, got the record, or actually had someone get the record for us when we were on tour with Ozzy [Osbourne]. And she got the record the day it came out. She [played] about seven tracks and took it off, and that’s the only time I really ever heard it. I watched the video — the one they did in a prison [for the ‘St. Anger’ title track] — so I saw that a couple of times and I heard that song a couple of times. But I won’t speak anything ill of METALLICA, because… you know what I mean?!”

He continued: “Are they the best-sounding records they’ve ever made? No. But ‘Death Magnetic’, I think, has some juice. I think it shows that they’ve still got it.

“I did see them play one of their new songs on the TV, on the [BBC television show ‘Later… With Jools Holland’] a couple of years ago. And I don’t know what the name of the song was. It was, like, a seven-minute song. It was fuckin’, ‘Whoa!’ And I just stood up in my living room when they were done, and I was [cheering them].

“I’m a fan of METALLICA, so that’s kind of the way it is. But ‘Master Of Puppets’ is the shit for me.”

Canadian metal innovators VOIVOD were joined by their former bassist Jason Newsted and DOWN/ex-PANTERA frontman Philip Anselmo during their June 23 performance at Hellfest in Clisson, France. Fan-filmed video footage of the concert can be seen below.

Newsted joined VOIVOD in 2002 and served as producer for the metal legends’ self-titled album in 2003 on the Chophouse Records label (in association with Surfdog Records).

Longtime friends and pioneers of metal music, Newsted and original VOIVOD vocalist Snake (a.k.a. Denis Belanger), guitarist Piggy (a.k.a. Denis D’Amour), and drummer Away (a.k.a. Michel Langevin) first began working together at Newsted‘s Chophouse studio in 1995, intent on keeping the music alive between busy touring schedules. However, with Newsted‘s departure from METALLICA in January 2001, he was free to join VOIVOD as a full-fledged member and would remain involved with the group until 2008.

Corey Taylor (STONE SOUR, SLIPKNOT), Jason Newsted (METALLICA, VOIVOD, FLOTSAM AND JETSAM), Philip Anselmo (DOWN, PANTERA), David Ellefson (MEGADETH) and the Todd La Torre-fronted version of QUEENSRŸCHE are among the musicians who spoke to Fuse on the “black carpet” at the fifth annual Revolver Golden Gods awards on May 2 at Club Nokia in downtown Los Angeles, California about which terrible songs they wish would be banned for all eternity. Check out the footage below.

Source: Bravewords.com
NEWSTED, the band fronted by former METALLICA/VOIVOD/FLOTSAM AND JETSAM bassist Jason Newsted, kicked off their US tour on April 19th in Walnut Creek, CA at Red House. Fan-filmed video, which includes footage of the band performing some METALLICA classics, can be viewed below:

US tour dates are as follows:

Visit this location to get access to VIP ticketing packages for all US dates.

NEWSTED have also confirmed more European tour dates, including a special appearance at The 100 Club in London, England on June 12th.

Ticket links can be found at this location.

NEWSTED recently finished recordings for their debut full-length album. Check out the video update below:

As previously reported, STAIND guitarist Mike Mushok has joined NEWSTED. Following the release of NEWSTED’s explosive EP, Metal – which debuted #1 on the iTunes metal chart, Mushok, guitarist Jessie Farnsworth and drummer Jesus Mendez Jr. are currently pounding away at Jason’s Chophouse Studios in Northern California, putting the final touches on a full-length album to be released early this summer.

“It was obvious from the word go that Mike is one of us,” says Jason. “Professional, focused, happy and grateful to be able to make our beautiful noise together!”

“I loved the old school vibe of the Metal EP, and when we got together to jam it really felt great,” adds Mushok. “Staind is taking a break for a while, so when Jason asked if I was interested in joining them to record an album and play on the upcoming tour, it was perfect timing. All I could say was, Hell yeah! I’m totally down for this.”

Check out a video introduction of NEWSTED‘s new line-up below:

Jason Newsted: “The Only Original Thing In Heavy Metal Is BLACK SABBATH”

ARTISTdirect’s editor-in-chief Rick Florino recently sat down with NEWSTED frontman Jason Newsted (ex-METALLICA, VOIVOD, FLOTSAM AND JETSAM) to talk about his new EP Metal and other topics. Excerpts from the chat below: 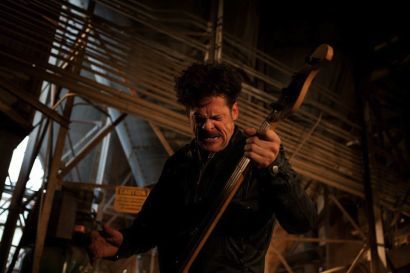 ARTISTdirect.com: Is it important for you to tell stories with the lyrics? You can see the songs as much as you hear them.

Newsted: “That’s a great statement. That’s what it’s about. It has to be something people can remember and sink their teeth into. I do not want fodder. I learned most of this from Snake from Voivod. In my opinion, he is the greatest word weaver in metal music and possibly in pop music. John Lennon did pretty good. (James) Hetfield does good. There are a couple of other people that do pretty good as well. Snake is the very best. English is his second language, and he still manages to make it so magical. Like you said, you see the words and the story and hear the music. I got that from him mostly to begin with. I’ve been writing lyrics for decades. Flotsam and Jetsam was all my lyrics. I tried to paint pictures of things like that. It has to be something that makes sense. There are no wasted words in the songs.”

ARTISTdirect.com: What influences you outside of music?

Newsted: “A lot of them have to do with documentary films and reading. The (Pat) Tillman thing came from reading. Certain influences come from that. Then you tap into experiences you’ve had, you start channeling, and it comes to you. At least it does for me. Once you start practicing that for years and know how to tap into the stream, then you can start pulling things out. It’s like it is with my paintings. I channel it, and it happens. I don’t really plan on what the painting is going to be. It just becomes what it becomes. Whatever comes out of my head is what happens. It’s the same with music. The immediacy of the music is because I was able to capture it the moment it came to me. I’ve got my guitar in hand and Garage Band ready. The moment I channeled it I recorded it, and it became the song as opposed to knocking it around, overthinking it, and all of that crap. Modern technology has been a big help in me getting it the way it is now.”

ARTISTdirect.com: Does painting come from a different mindset than music?

Newsted: “There’s definitely a rhythm to it. I always have to music going when I’m painting. A lot of times the lyrics of those songs find themselves in the text in the painting. It’s a direct link to the music. By happenstance because of severe shoulder surgeries, I was “one-armed” for almost four years with three different surgeries—right arm, left arm, right arm. I had to learn to use both hands equally. All of my paintings are done with both hands and both sides of my brain. It’s like two people are coming at the canvas. It is a direct link. The paintings are the same as the music intensity-wise and color-wise the same as my bass playing. It’s the same thing just a different medium. It has to do with channeling and finding that place. None of it comes from nowhere. I try to keep a real wide variety of listening practice, and I have for years. I listen to all kinds of music in different languages with different instruments to make myself a better player. The more you pour in with books, documentaries, and good music, the more you regurgitate it out of your filters, it becomes your own. Things will always be regurgitated. The only thing original in heavy metal is Black Sabbath. Everything derives from that. In my style of painting, everything derives from Picasso. There are certain people who are such innovators that there’s no choice to just derive from that or take their lead. I try to take the lead of many great heroes, regurgitate it through my filter, and spit that shit out. I keep high standards. If it’s up to those standards or pretty close, other people dig it too.”

ARTISTdirect.com: Does the EP lay the groundwork for the full-length?

Newsted: “Yeah! The initial intent of EPs back in the day was to be the primer of what’s going to come on the LP. We’re going to re-record a couple of songs for the LP, but the rest are all fresh songs. We’re delivering 13 tracks. Mike Mushok has been in the band for seven weeks, and we already completed the LP.”
Newsted will be part of some European festivals in June.

Check out the dates below: