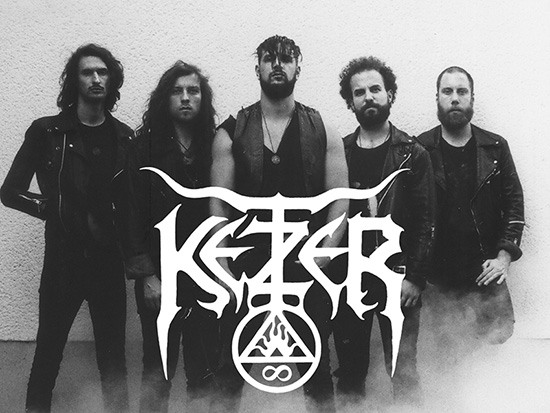 Ketzer have checked in with the following comment about the clip as follows: “Recorded during two cold days and nights in Leipzig by the magnificent director Paul Schlesier of Pallid Eyes Films we hereby present to you the first video clip in the band’s history to our new single entitled ‘Keine Angst’. Press play and experience a nightmare put to film!”

For another preview of Cloud Collider, the album’s previous singles, “The Wind Brings Them Horses” and “No Stories Left” (featuring a special guest appearance by the legendary Proscriptor McGovern of Absu fame), can be still be heard at: metalblade.com/ketzer. At the same location you can order Cloud Collider.

Ketzer are embarking on the “Black Bombs and Storm Clouds” European tour together with Danish act Slaegt. Here is a list of all upcoming shows announced so far for Ketzer:

Looking on Ketzer‘s musical history, change is what has always defined their sound. From thrashing riffs to atmospheric blackened tunes, Ketzer is a band that has always aimed to defy genres. So what can we expect on Cloud Collider? Nothing more than a ride on a storm cloud, followed by a soft breeze in your face and, finally, a cleansing rainfall. Ketzer‘s fourth effort will surprise many as a shift into yet another direction, combining many of the band’s essential trademarks and carrying them one step further: Raging drum beats, harsh and powerfully thrashing riffs, as well as epic melodies that will haunt you long after the last tone has faded away. After years of intense work, Ketzer have created an album that can only be described as a milestone in their career and a clean break from all expectations: this album is a storm.

For three years now, Ketzer has been working on something new, and the result is something new indeed: somehow linking all trademarks essential to the sound of Ketzer, now and then, but taking it all one big step further. These new tunes might well be the strongest Ketzer songs to date. Recorded at Markus Stock’s infamous “Klangschmiede Studio E” as well as Laurent Teubls “Sculpt Sound Studios” in autumn 2018, the suitable visual expression for this new effort has been found by cover artist Adam Burke and illustrator Johannes Stahl.

Ketzer checked in with the following comment about Cloud Collider: “Lately, we have been possessed by storms. First there is a breeze, then the sky darkens: A sense of electric energy starts to fill the air. A sense of sheer power, building up, waiting to erupt. ‘Cloud Collider‘ will strike you like a force of nature. When recording an album after months of hard work, blood and sweat, it is always our greatest wish, accompanied by the most terrifying fears, that the recordings will be able to ‘catch’ the songs and their certain, special spark. When we hear the final result for the first time, we have to think: ‘THIS is how the next chapter must sound’. Only then, we can be satisfied. With all the more pride and joy we can now say about ‘Cloud Collider‘, that both is the case, and it is without a single doubt! THIS is how Ketzer has to sound in 2019! It is new and it is old and it is everything. It is fast and it is slow and we just can’t wait to bring these songs to the stage. This album is a piece of work that we feel embodies all aspects that stand and stood for the sound of Ketzer now and then. An album that manages to still go one step further to form something new!”

For a preview of Cloud Collider, the album’s new single, “The Wind Brings Them Horses”, can now be checked out here:

Ketzer checked in with the following comment: “Prepare yourself for the second single of our new album ‘Cloud Collider‘! Winds may turn into Storms. And today ‘the wind brings them horses’!”

For another preview of the album, the first single, “No Stories Left” (featuring a special guest appearance by the legendary Proscriptor McGovern of Absu fame), can be heard at: metalblade.com/ketzer – where you can pre-order Cloud Collider.

Starting with the release show for Cloud Collider on April 12th in Oberhausen, Germany at the Helvete venue, Ketzer will be embarking on the “Black Bombs and Storm Clouds” European tour together with Danish act Slaegt. Here is a list of all upcoming shows announced for Ketzer:

German extreme metallers KETZER recently returned from their tour with Primordial and have now released professionally filmed live videos for the songs “When Milk Runs Dry” and “Starless”, both taken from their latest album, Starless – which was released earlier this year via Metal Blade Records. To watch the footage, head over to YouTube: youtube.com
or Vimeo: vimeo.com

KETZER comments: “More than a month has passed now since we returned from the tour withPrimordial and Svartidaudi, leaving us with some great memories about the time we spent together on the road. But the best moments as a band happen on stage. The clip should give you an impression of how much we enjoy the opportunity to perform our music in front of people coming to the shows. It was filmed by a part of the Metal Blade crew during our performance at the Backstage Club in Munich.”

For another preview of Ketzer‘s latest album, Starless, please visit metalblade.com/ketzer – where the record can also be purchased in various formats!

In conjunction with RED Music, Metal Blade Records has launched a new edition of the “6 Bands in 60 Seconds” campaign, where CEO Brian Slagel spotlights six artists from the label’s roster every three months. The goal of the promotion is to help fans discover new music from some of the most promising acts in the scene. The latest installment of the series features Brimstone Coven, Ketzer, Gehennah, Accuser, Artillery, and Sourvein; to watch the video clip, and to learn more about the artists, please visit: metalblade.com/6bands

Ketzer (German for “heretic”) also released their latest album, Starless, this past January. From sounds of raging fury, to the echoes of calm and cleansing waves, Starless is a record that will take you on a journey that is unexpected, yet familiar at the same time. As Decibel Magazine asserts, “What Ketzer have done on ‘Starless‘ is open up a large swath of potential musical territory, while also managing to understand the confines of their origins. They’ve figured out a new vocabulary.” For more information, please visit: facebook.com/ketzergermany

After nearly 20 years, this past February marks the first full-length release (Too Loud To Live, Too Drunk To Die) from Swedish street metallers Gehennah, since 1997′s Decibel Rebel. “If you’ve ever wondered what Motorhead riffs sound like backwards, or you believe spirit – and spirits! – are more important than musicianship, then Gehennah are your new favorite bar-brawling bruthas” (Decibel Magazine). For more information, please visit: facebook.com/gehennah.metal

Last week, German thrashers Accuser unleashed their 11th full-length, The Forlorn Divide, featuring the band’s trademark blend of powerful thrash metal, virtuoso guitar-work, intricate drum patterns – and of course, gripping, harsh vocals, highlighting the dark recesses of human psyche that are described in the lyrics. After 30 years in the scene, the members of Accuser have perfected their signature style: “The younger generation could learn a thing (or ten) from these gentlemen” (DeadRhetoric.com). For more information, please visit: facebook.com/Accuser2008

On March 25th, Danish power-thrash metallers Artillery will unleash their new album, Penalty By Perception. A familiar, yet modern thrash attack, Penalty By Perception delivers the band’s signature riffing, with powerful drumming and melodic singing – and promises to be a new fan favorite in the quintet’s storied career! For more information, please visit: facebook.com/ARTILLERY.DK

For over two decades, Sourvein front-man T-Roy has pushed through poverty, the deaths of friends and family, bouts of severe depression, periods of alcohol abuse, and an absence of the stability provided by a consistent record label to build the band into a highly respected force in the metal, doom, sludge, and crust underground. At long last, Sourvein has found a proper home for their doom-laden Southern noise with Metal Blade Records, who will be releasing their upcoming full-length, Aquatic Occult, on April 8th. For more information, please visit: facebook.com/SOURVEIN-238932972468 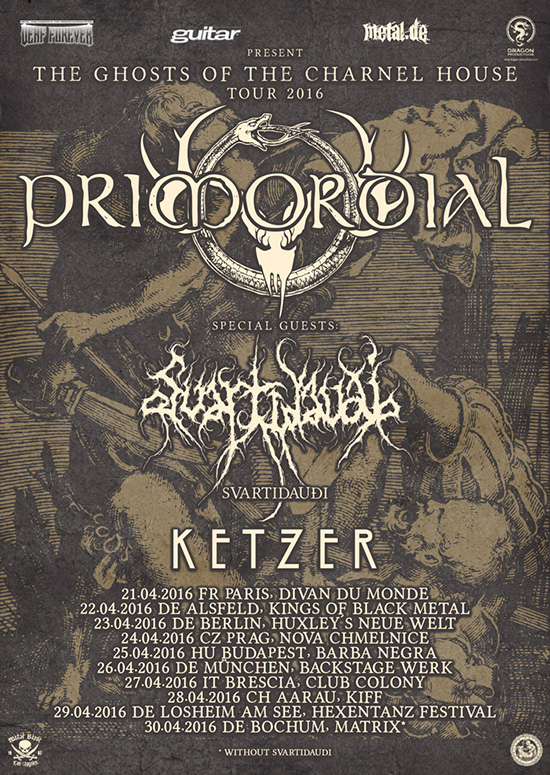 Comments PRIMORDIAL: “Well isn’t it about fucking time we tour Europe again? Been long over due, but time moves slow in Primordial land. So here we are in 2016 ready to announce a week and a half with Ketzer and Svartidaudi. What goes around comes around, so we’ve made the package interesting and we will honour a proper long set taking in all of the bands works. To make it worth your damn while. 70s style…No festival sets this time. so stoke the fire before Europe burns to the ground and we shall see you all at the feast of the GHOSTS OF THE CHARNEL HOUSE!“

Comments KETZER: “Having just released our third album STARLESS, we now got a fever and the only prescription (besides more cowbell) is to finally bring the new songs on stage. So, we are more than pleased to announce that we will hit the road in April and tour through Europe together with PRIMORDIAL and SVARTIDAUDI. The opportunity to join such a diverse line-up makes us even more excited. Make sure to catch the “Ghosts of the Charnel House” Tour and join in when we will combine old and new songs to a mesmerizing unity!“

PRIMORDIAL released their latest album ‘Where Greater Men Have Fallen‘ in November of 2014. Watch the videoclips and order your copies of the album at metalblade.com/primordial.

KETZERs new album ‘Starless‘ is out now via Metal Blade Records. Listen to the album and order your copies at metalblade.com/ketzer.

This Friday, January 29th, Germany’s KETZER will release their new album, “Starless”, via Metal Blade Records! To pre-order the record in various formats – and to hear “Starless” in its entirety! – please visit: metalblade.com/ketzer

KETZER (German for “heretic”) spent two months in the studio during the summer of 2015, recording their third album, “Starless”. From sounds of raging fury, to the echoes of calm and cleansing waves, “Starless” is a record that will take you on a journey that is unexpected, yet familiar at the same time. Thematically, the band explores the idea of religion v. reality– is there a truth in between? KETZER explains, “Centuries ago, humankind looked up into the star-filled night skies, questioning the universe and their lives within it. In order to find answers, mythology was born. But religion and myths cannot connect to the world we live in today. They have blinded the night skies – hence, we have become ‘starless’.”

Read on for a few reviews of KETZER‘s critically acclaimed new album:

“‘Starless‘ is wayward and maladjusted, thus eventually more metal than the average band that indulges in the 80s. The future of metal? Fine for me!” – Deaf Forever magazine (Germany)

“Ketzer are evil, sinister and mean free-thinkers that give a shit about your conventions!” – Metal Hammer magazine (Germany)

“Indeed, Ketzer know exactly where to go and simply make you crave for more as well as curious about the future!” – Rock Hard magazine (Germany)