MANOWAR has launched the “Kings Of Metal MMXIV” Video Contest via the band’s Official Website:

This is how you can join:

1. Download the specially edited short version of “The Blood Of The Kings MMXIV” (Pre-Release Version) from the upcoming new MANOWAR album ‘Kings Of Metal MMXIV’.

2. Create your own “The Blood Of The Kings MMXIV” (Pre-Release Version) music video.

3. Upload your video to YouTube or any other publicly accessible video-sharing platform.
When you upload your video, remember to include “Kings Of Metal MMXIV Fan Video” in the title.

4. Submit the link to your video through our special Contest Submission Form.

Winning videos will be selected by MANOWAR.

To learn more about the ‘Kings Of Metal MMXIV’ album release go to http://bit.ly/1ayOb6G and check www.manowar.com and www.facebook.com/manowar for more info and constant updates. 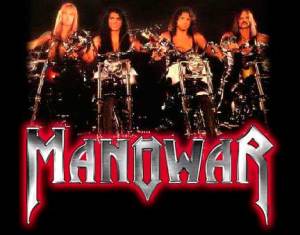 Legendary American heavy metallers MANOWAR have just invited their fans to ‘The Kings Of Metal MMXIV’ Video Contest via a post on their official Facebook page. MANOWAR are going to celebrate their 25th anniversary by releasing a brand new special version of the album, ‘Kings Of Metal MMXIV’, on February 28, 2014 and with a world tour. The band posted:

“And MANOWAR call YOU to become an immortal part of this special celebration by submitting your own “The Blood Of The Kings MMXIV” music video!

Prizes include free tickets to a MANOWAR show of your choice on the ‘Kings Of Metal MMXIV’ World Tour, and much more!
Winning videos will be selected by MANOWAR.

1. Two free tickets to a MANOWAR show of your choice on the ‘Kings Of Metal MMXIV’ World Tour (transportation and accommodation not included)

2. Your video will be published on Magic Circle Music’s YouTube channel, the MANOWAR website and MANOWAR’s social networks

3. Your video will be used on the ‘Kings Of Metal MMXIV’ World Tour

4. A MANOWAR merchandise voucher worth 300 US Dollars

5. The new ‘Kings Of Metal MMXIV’ CD, personalized in your name and autographed by MANOWAR

1. Your video will be published on Magic Circle Music’s YouTube channel, the MANOWAR website and MANOWAR’s social networks

2. Your video will be used on the ‘Kings Of Metal MMXIV’ World Tour

3. A MANOWAR merchandise voucher worth 200 USD

4. The new ‘Kings Of Metal MMXIV’ CD, personalized in your name and autographed by MANOWAR

1. Your video will be published on Magic Circle Music’s YouTube channel, the MANOWAR website and MANOWAR’s social networks

2. Your video will be used on the ‘Kings Of Metal MMXIV’ World Tour

3. A MANOWAR merchandise voucher worth 100 USD

4. The new ‘Kings Of Metal MMXIV’ CD, personalized in your name and autographed by MANOWAR 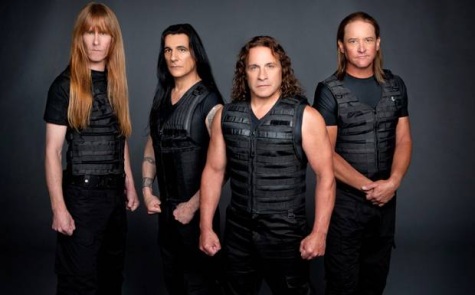 * Read all details and the Terms & Conditions of this contest here:
http://manowar.com/videocontest/ 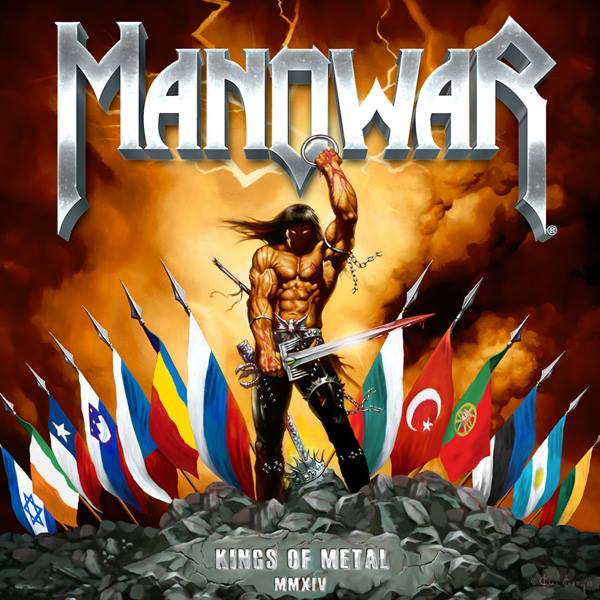 MANOWAR has checked in with the following:

MANOWAR have revealed the front cover of their upcoming double album ‘Kings Of Metal MMXIV’, an evolution of the original 1988 cover by Ken Kelly.

A new painting by Ken Kelly, featured on the back of the CD, will be revealed soon.

“Ken has always been able to perfectly capture the essence of MANOWAR in his art. These covers, the two new ones and the one he created in 1988, visualize what MANOWAR, our music and our fans stand for! Just look at these paintings and the story they tell: People have tried to keep this warrior down, attacked him and attempted to destroy him. But he stood tall, no matter what! He fought for true metal in country after country. And he will continue the march and fight for his brothers and sisters all over the world, until all enemies of true metal have been crushed!“ explained Joey DeMaio.

“This collaboration has been an incredible experience once again”, said Ken Kelly. “We didn’t know where the journey would lead us. The art literally takes over and the music and the lyrics guide us. I truly believe the MANOWAR fans are going to love this series.”

‘Kings of Metal MMXIV’ is a completely new recording, celebrating the 25th anniversary of the release of ‘Kings Of Metal’.

The ‘Kings of Metal’ release in 1988 and the following world tour in 1989 catapulted MANOWAR into a new sphere. Songs like “Heart of Steel”, “Kings of Metal”, “Hail and Kill”, and “Blood of the Kings” became instant classics, celebrated since by metal fans all over the world.

For ‘Kings Of Metal MMXIV’, MANOWAR have recorded these timeless metal anthems with new arrangements and their signature “larger than life” sound that sealed their place in heavy metal history.

‘Kings Of Metal MMXIV’ will feature 9 main tracks packed with face-melting metal, plus 10 bonus tracks with over 45 minutes of additional music.

The spoken word track “The Warrior’s Prayer MMXIV” features celebrated British actor Brian Blessed, a renowned Shakespeare and character actor who has starred, among others, in Kenneth Brannagh’s “Henry V”, in “King Lear”, and as Prince Vultan in the cult movie “Flash Gordon”.

Special effects of the highest level were provided by award winning sound designer Hamilton Sterling, known for “Batman – The Dark Knight”, “Men In Black 3”, “War of the Worlds”, and “Master and Commander: The Far Side of the World”, two of which won Oscars® for Best Sound Editing.

‘Kings Of Metal MMXIV’ will be released in retail on February 28, 2014 as a 2 Disc CD with two 24-page booklets and new cover art by legendary fantasy artist and longtime collaborator Ken Kelly, and will also be available as a digital double album.

The ‘Kings Of Metal MMXIV’ world tour, featuring the complete new album and many other classics in a completely new stage production starts on February 7, 2014 with a long-anticipated U.S. tour and will then resume on March 18 in Europe.

All tour dates can be found on http://www.manowar.com/tour

Kings Of Metal MMXIV Track List (not in final order):

MANOWAR has checked in with the following message:

Following movie and theater legend Brian Blessed (Hamlet, Flash Gordon) MANOWAR have teamed up with another Hollywood veteran, sound designer Hamilton Sterling (pictured below), for ‘The Warrior’s Prayer MMXIV’ from their forthcoming new album Kings Of Metal MMXIV. Blessed had recorded the epic narration earlier this year and called it “a brilliant piece of writing” and the collaboration with Manowar “completely miraculous and life changing”.

“Brian did a sensational job! He didn’t just narrate the story. He performed it.”, said Manowar bassist and producer Joey DeMaio. “When you listen to the narration, you feel like you are watching a short Hollywood movie. We instantly knew that we had to complement Brian’s outstanding performance with sound effects of the same quality. We searched for another Hollywood heavyweight, and Mr. Hamilton Sterling was the perfect choice!”, DeMaio explained.

Hollywood veteran Hamilton Sterling is a sound effects specialist with numerous credits including action blockbusters like The Dark Knight, Men In Black 3, War Of The Worlds, and Master And Commander: The Far Side of the World, two of which won Oscars for Best Sound Editing.

“My friend, the Grammy Award winning Audio Engineer Rich Breen, contacted me regarding Manowar’s soundscape project ‘The Warrior’s Prayer MMXIV’. In this case, a previously recorded narrative framework was in place, spoken by the excellent actor Brian Blessed, who I had seen as a young man in Robert Graves’ I, Claudius. His evocative performance was a marvel of emotion, and its dynamic range allowed me the space to move from the most quiet and ethereal sounds to full-on battle. His imaginative performance was an excellent guide, as was Mr. DeMaio’s sense of story and direction.”, said Hamilton Sterling.

Celebrating Manowar’s worldwide metal community, the festival is hosted by different countries and has previously taken place in Germany and Slovenia, where it was attended by metal fans from more than 35 nations.

“We are very excited to bring the Magic Circle Festival for the first time ever to Finland,” said promoter Hardi Loog. “We are going to have a fantastic festival, with Manowar headlining with their special Kings Of Metal 2014 anniversary show, plus more bands and lots of other entertainment for an unforgettable metal experience!”

In their headlining anniversary show Manowar will perform the entire Kings Of Metal MMXIV album, a brand new special version of their hit album, Kings Of Metal that will be released in spring, along with a Best Of set of other immortal metal hymns in a completely new stage production.

“We are calling all Finnish Manowarriors to get ready to join us for the biggest Metal show of 2014!” announced Manowar bassist Joey DeMaio. “And we are calling the Manowarriors from Denmark, Sweden, Norway, England, Germany, and from every metal country in the world to get their asses to Helsinki next summer. If you haven’t been to Finland before, this is the perfect opportunity! The Finnish warriors will show you how to really drink, party and have a great time!”

Different ticket options, including Ultimate Fan Packages, will be available. Prices start at 75 euros. Tickets will go on sale on November 4, 2013 at Tiketti.fi and Lippupalvelu.fi.

Details about the further line up and additional entertainment activities will be announced soon.

MANOWAR invite their worldwide fans, the “Army Of Immortals“, to be a part of the 25th anniversary of “Kings Of Metal”.

In celebration of the anniversary, MANOWAR will release a brand new special version of the album, “Kings Of Metal MMXIV”, that will feature additional bonus tracks and bonus material among many other surprises.

And MANOWAR want their fans to become an immortal part of this special celebration!

Fans who wish to have their picture featured as part of the “Kings Of Metal MMXIV” artwork follow the link to submit their photo: http://www.manowar.com/photocontest/photocontest.php

Among all submissions MANOWAR will raffle away 25 surprise merchandise packages from The Kingdom Of Steel, the only authorized store for official MANOWAR merchandise!

A once-in-a-lifetime opportunity for Manowarriors worldwide to join MANOWAR and “Kings Of Metal MMXIV”!

To learn more about Kings Of Metal MMXIV go to http://bit.ly/15V4FWE

For more info and constant updates go to: www.manowar.com
www.facebook.com/manowar 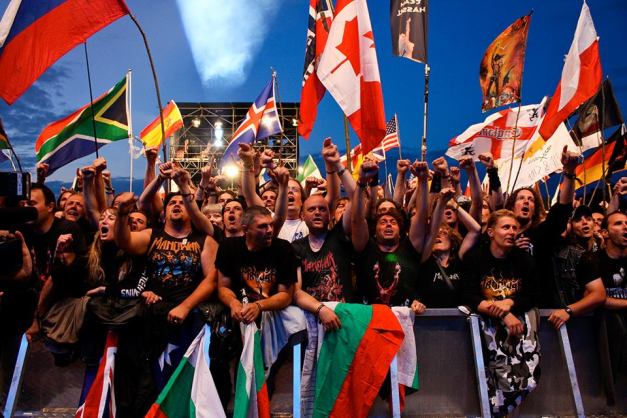