ROSS THE BOSS, the co-founder of MANOWAR, is coming back to Australia and New Zealand with a slew of other Manowar classics guaranteed to see fists raised to the roof!

“We will bring the message of True Metal to our Immortal Metal Armies. We will deliver an experience only to be described as, true classic metal. We are going to devastate every audience, every night, without mercy.” — Ross the Boss 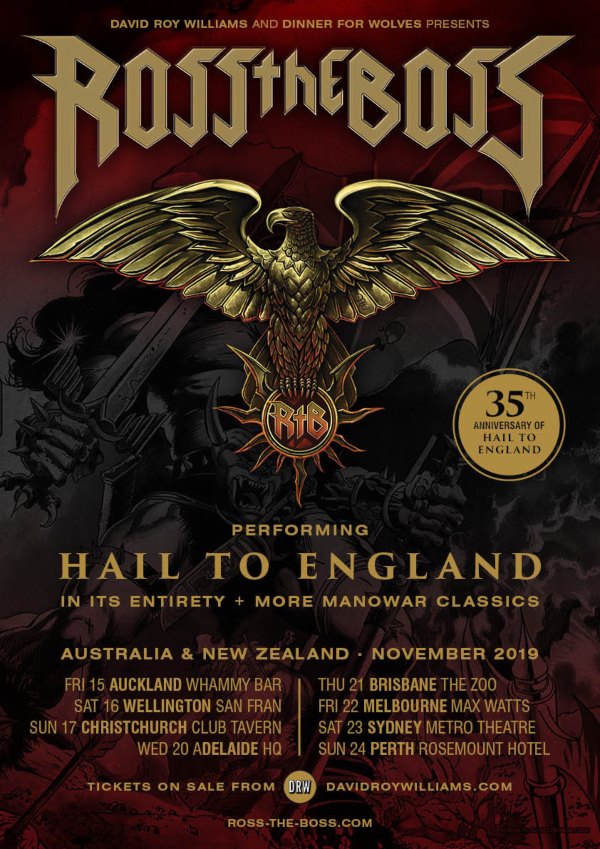 Watch the tour trailer below.

Formed in 1980, Manowar launched an all-out assault on complacent boring metal. Bombastic, epic and above all exhilaratingly LOUD, Manowar sought to destroy all who stood in their path. Led by Joey DeMaio, Eric Adams and the soul-crushing guitars of Ross The Boss Freidman, Manowar broke the Guinness record for the loudest band ever not once, but three times.

Now Ross The Boss is cranking the amps up to 12. Sitting proudly at #87 on Rolling Stone’s Greatest Metal Albums Of All Time, “Hail To England” merged the sound of the new wave of British Metal with skull-melting thrash intensity, and started punching holes in the membrane of the Universe. 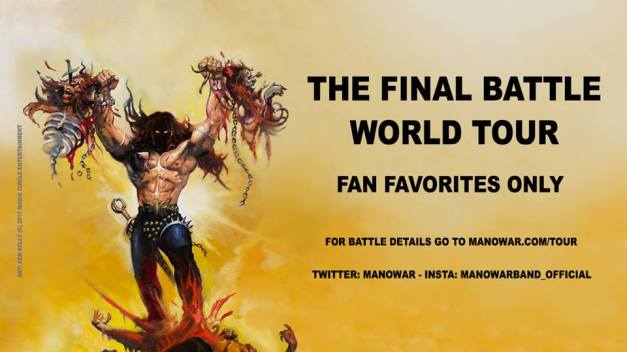 Heavy Metal icons MANOWAR have announced, via their Facebook Page, that E.V. Martel will be the guitarist on MANOWAR’s upcoming Final Battle World Tour 2019. Read more below:

“A musician since the age of 8 and devoted MANOWAR fan, E.V. lives the life of true metal and the music of MANOWAR. He has performed for years in the only official MANOWAR tribute band in the world. E.V. is proud to know every MANOWAR song ever recorded, and his style is a mix of all previous MANOWAR guitarists combined with his own metallic burning.

“I can think of no one more deserving to play with MANOWAR than a fan themselves; one who has dedicated their entire life to our fans and our music and who he has proven to be a true Manowarrior!” said Joey DeMaio.

“I am honored beyond words to play for the greatest fans in the world!” said E.V. “I live by MANOWAR’s message every day of my life: Believe in yourself and even your wildest dreams can come true!” 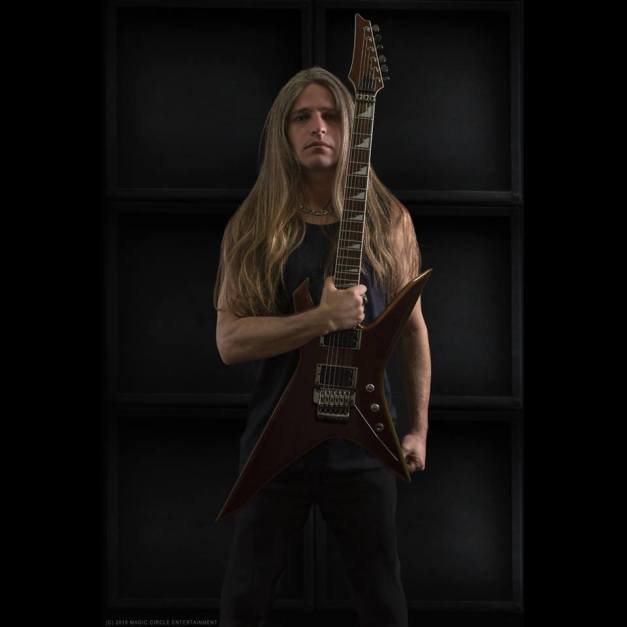 MANOWAR’s Final Battle World Tour 2019 will kick off on February 25th, 2019 in Tel Aviv, Israel and will span over 28 cities; from Siberian Russia to Germany, Scandinavia and Birmingham, England to the far west of France!

A limited number of ULTIMATE FAN EXPERIENCE UPGRADES, for the most personal fan experience ever, are available on this tour!

Upgrades are available exclusively on The Kingdom of Steel (Europe). To order your ULTIMATE FAN EXPERIENCE Upgrade click HERE. 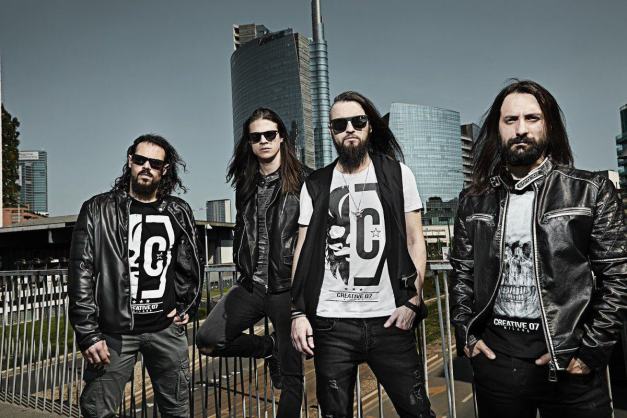 Symphonic death metal quartet GENUS ORDINIS DEI have revealed a brand-new music video for their latest single, “Hail and Kill”. The song, which was originally written and recorded by the legendary power-metal band MANOWAR is out now via iTunes, Amazon, Google Play, Spotify, Apple Music and more! The video was directed by Steve Saints.

Watch the ‘Hail and Kill’ music video below:

“We’ve always been true fans of this legendary metal band and we know that Manowar inspired thousands of bands, including us” says vocalist Nick Key. Guitarist Tommy Mastermind adds, “Representing the universe of Manowar in just one is song is not only hard, it’s impossible. We’re excited and honored to pay homage to the Kings of Metal with our cover version of Hail and Kill. We did our best to arrange a song that we, as true Manowar fans, want to listen and recognize as a true classic… Hail!” 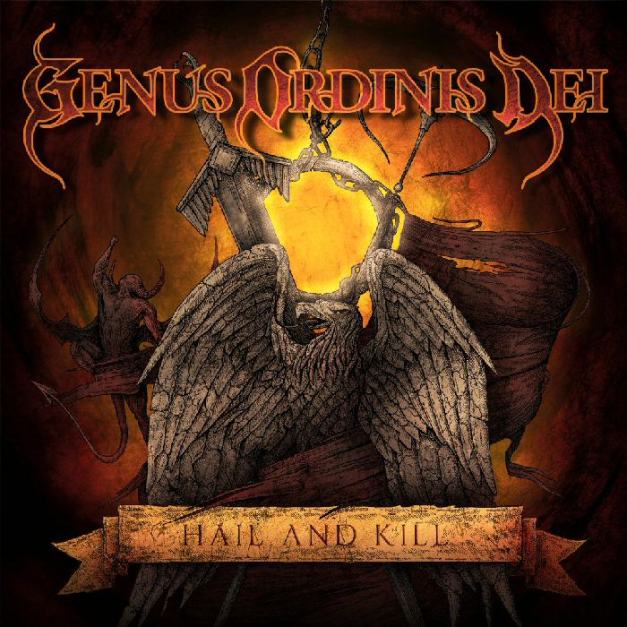 This is the latest music video and single from the band since releasing their full-length album Great Olden Dynasty in November of 2017. The album received critical acclaim from dozens of media outlets worldwide.

Posted by tarjavirmakari on July 25, 2018
Posted in: Int. News. Tagged: Fighting the World, Kings of Metal, Manowar, The Triumph of Steel. Leave a comment 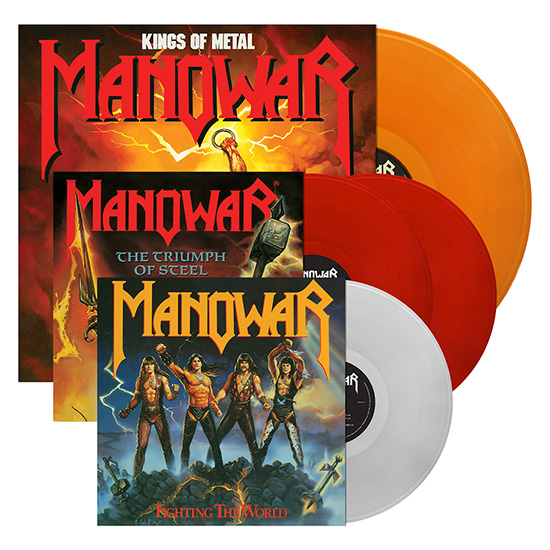 On August 24th, MANOWAR will release LP re-issues of their classic albums Fighting the World, Kings of Metal, and The Triumph of Steel via Metal Blade Records. See below for an overview of all versions; pre-order your copies now at: indiemerch.com

Fighting the World (Clear Vinyl – limited to 1500 copies)
Side A
1. Fighting the World
2. Blow Your Speakers
3. Carry On
4. Violence and Bloodshed
Side B
5. Defender
6. Drums of Doom
7. Holy War
8. Master of Revenge
9. Black Wind, Fire and Steel

Kings of Metal (Translucent Gold Vinyl – limited to 1500 copies)
Side A
1. Wheels of Fire
2. Kings of Metal
3. Heart of Steel
4. Sting of the Bumblebee
5. The Crown and the Ring (Lament of the Kings)
Side B
6. Kingdom Come
7. Hail and Kill
8. The Warriors Prayer
9. Blood of the Kings

The Triumph of Steel (Translucent Red Vinyl – limited to 1500 copies)
Side A
1. Achilles, Agony and Ecstasy in Eight Parts
Prelude
I. Hector Storms the Wall
II. The Death of Patroclus
III. Funeral March
IV. Armor of the Gods
Side B
V. Hector’s Final Hour
VI. Death Hector’s Reward
VII. The Desecration of Hector’s Body
– A. Part 1
– B. Part 2
VIII. The Glory of Achilles
Side C
2. Metal Warriors
3. Ride the Dragon
4. Spirit Horse of the Cherokee
5. Burning
Side D
6. The Power of Thy Sword
7. The Demon’s Whip
8. Master of the Wind

ROSS THE BOSS Premiere New Song “This Is Vengeance”

Posted by tarjavirmakari on March 29, 2018
Posted in: Int. News. Tagged: “This Is Vengeance”, Manowar, Ross The Boss. Leave a comment 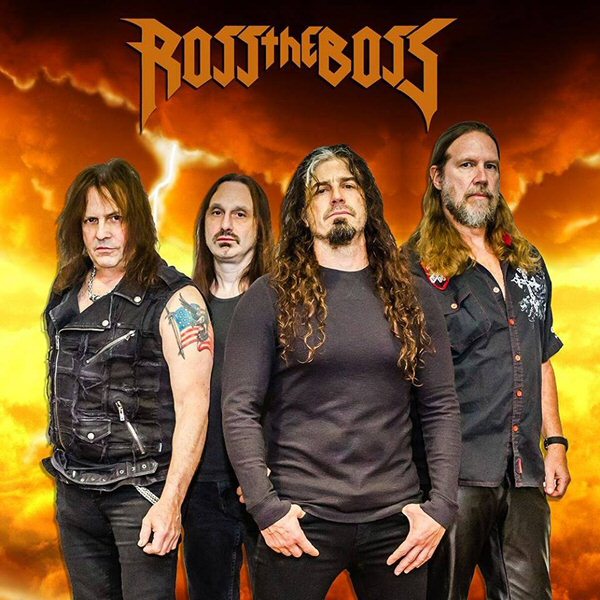 Eight long years have passed by since “Hailstorm“, the latest album by heavy metal icon and Manowar co-founder ROSS THE BOSS, was released. But on April 20th the world will finally witness the return of Ross and his band, dishing out a full dose of raw and epic metal greatness: “By Blood Sworn”.

Now the first song “This Is Vengeance” is made available for streaming, check it out below: 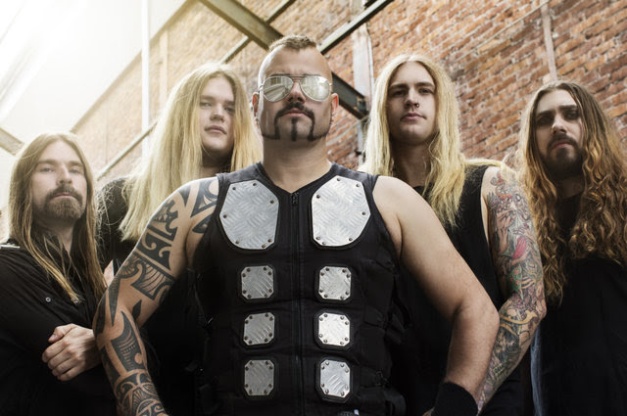 Swedish heavy metal heroes SABATON concluded their triumphant North American co-headlining run with German thrash titans and label mates KREATOR a few days ago but before they fly over to Australia to continue their world tour, the band have revealed a brand new music video as part of their collaboration with Czech Warhorse Studios. SABATON‘s cover version of MANOWAR‘s track ‘Kingdom Come’, combined with scenes from the brand new game “Kingdom Come: Deliverance”, can be viewed here:

Additional info about the game can be found, here:
http://www.facebook.com/WarhorseStudios
http://www.warhorsestudios.cz