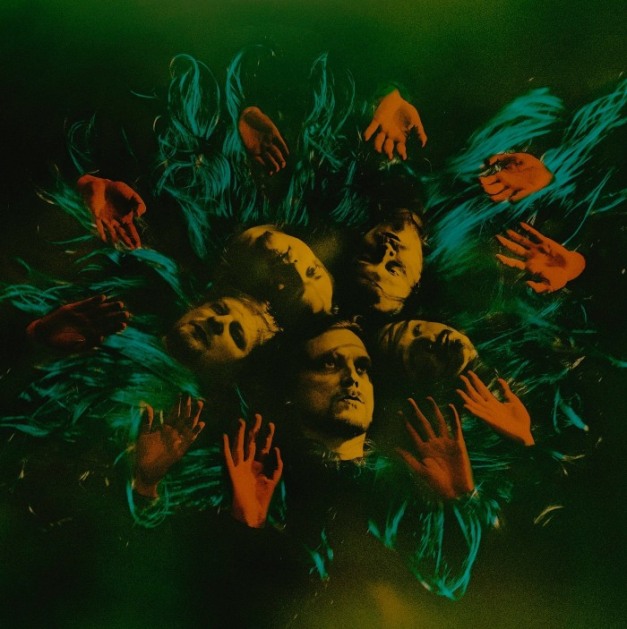 Finland’s black metal anti-traditionalist ORANSSI PAZUZU will finally return to the stages in 2021, since their tour for autumn of this year unfortunately had to be cancelled.

After recently releasing their new album “Mestarin kynsi” and contorting the minds of listeners with their psychic and colourful black metal that knows no boundaries, the Finns announce new tour dates for April and May. Their intense ride will be supported by Brazil’s DEAFKIDS and Norway’s STURLE DAGSLAND.

Catch them on one of the following dates next year:
Doomstar Bookings & A Flying Fox present
ORANSSI PAZUZU – New Technocracy European Tour 2021
with DEAFKIDS and STURLE DAGSLAND

Uncovering the intensity and the metal inherent in non-metal, the avant-garde and anti-traditionalist inclinations of Finland’s ORANSSI PAZUZU have always had transcendental goals at heart.

Through the rabbit hole and out the other side to 2020 with the release of their fifth album “Mestarin kynsi”, (“The Master’s Claw”). Inking a deal with German-based industry giants Nuclear Blast, ORANSSI PAZUZU subvert the idea of world domination to open a conceptual discourse on indoctrination and propaganda itself. Their psychological nightmare evolves a philosophical and earnest tone, where occult future meets troubled reality.

Check the stunning album trailer that ORANSSI PAZUZU have released to spread the word here:

As “Oranssi”, meaning “orange” in their native Finnish language, is the colour of cosmic energy and “Pazuzu” is the ancient Mesopotamian demon of the wind, their swirling kaleidoscope of psychedelia has blown through the underground to redefine boundaries ever since their inception in 2007.

Jun-His: “We definitely wanted to look for new horizons, but on the other hand continue something we began building already on “Värähtelijä”. Some big influences were electro albums that inspired an idea about having a song that would travel through different kinds of portals whilst being mutilated and mutated by the new environment.”

On “Mestarin kynsi” the doors of perception are not only evoked but off their hinges. Working again with their co-producer Julius Mauranen, who also helped craft their acclaimed 2018 Roadburn Festival commissioned, WASTE OF SPACE ORCHESTRA collaboration live show/album “Syntheosis”, in their home-city of Tampere, Finland, the familiarity served a greater purpose towards the evolution of the album. As singer/guitarist Jun-His puts it, “there is a city heart pumping on this album somewhere”.

The band in their own words: “Greetings from the US! We’re currently on the road with our first North American tour going smoothly, in large part thanks to our superb crew, Nanotear and the amazing INSECT ARK. Meanwhile, the new ORANSSI PAZUZU album is currently being finalized and will be complete during the next few weeks. There will be a high dosage of psychedelic alchemy on this one. The new sonic realms feel simultaneously natural and fresh to us and we look forward to serving them to your hungry ears. We are also playing some of the new stuff on the ongoing North American shows. While we have your attention, we’d also like to take this opportunity to announce new partnerships. Firstly, we have signed a management pact with FlyingFox AB. We are thankful for receiving the mega-level advisory skills of Erin Lynch, who has already proven herself a worthy companion. Secondly, we are psyched to announce that we have signed a recording deal with Nuclear Blast Records, who will be handling the worldwide release of the new album in 2020! Special thanks to Jens Prueter (Head of A&R, Nuclear Blast Europe) for understanding and respecting the band’s identity. Thirdly, from now on, our show booking in Europe will be handled by Doomstar Bookings. If you want to book ORANSSI PAZUZU, get in contact with Zoltan! On top of all this, we are massively excited to announce that we will be doing a very special show at Roadburn Festival 2020, as part of James Kent’s (aka PERTURBATOR) curation. We are humbled to have been asked once again to return to this great festival, in which we will play the new album in its entirety, live, for the first time prior to its release! And in case you missed the news yesterday, we’re also confirmed for Inferno Metal Festival in Oslo, Norway! In the meantime, catch us at one of the North American shows that we are touring right now. Thanks for your support!”

Since birth, ORANSSI PAZUZU, ‘The Demon Of The Wind With The Colour Of Cosmic Energy,’ has never been satisfied to stick with a formula. Each album has seen the band expand upon its previous incarnation and then, like a supernova, blow it up and transform again into something recognizable but completely new.

The band was formed in 2007 by Jun-His (vocals, guitar) and Ontto (bass guitar), who started jamming with Korjak (drums), and Evill (synthesizers, organ, effects) in order to travel into uncharted musical territories. During its initial months, the band wrote songs collectively, fusing together various influences from space rock to black metal, to capture different states of mental cosmos. These early songs were recorded in Korjakʼs family cabin in the late summer of 2008 and released as »Muukalainen Puhuu« in 2009.

In 2009-2010, ORANSSI PAZUZU played shows around Finland and continued to write music that twisted towards more metallic and aggressive moods. In September 2010, they played first concerts outside Finland in Germany and the Netherlands.

»Kosmonument,« their second full length album, a concept album about a drifter lost in the void, was released in October 2011, followed by various European festivals in 2012, including Roadburn Festival and Hellfest. A year later, the band decided to work with Jaime Gomez Arellano (GHOST, PARADISE LOSTetc.) and travelled to his Orgone Studios in London to record their third album »Valonielu« in 2013 which was presented live on their first full European tour shortly after.

ORANSSI PAZUZU returned in 2016 with the mindbending »Värähtelijä;« an album which continues in the vein of their previous album, giving the band much more room to diverge and explore the vast regions of hypnotic progressive psychedelia and the nebulous outer limits of Scandinavian black metal. Pitchfork wrote: “Four albums into their career, the Finnish quintet ORANSSI PAZUZU may have at last sidestepped the confines of the tag ‘black metal.’ Their latest 69-minute opus folds in krautrock, electric MILES DAVIS, stoner, thrash and more, finding the band lost – wonderfully, strangely somewhere between heaven and hell.” Spincalled it “one of the most exciting, least predictable metal albums in recent memory” and also Decibelhonored it with a 9/10 review: “ORANSSI PAZUZU’s psychedelia is grim, foreboding and intensely original, like if ‘Set The Controls’-era PINK FLOYD took a wrong turn during an LSD trip and ended up in an uncharted hell dimension.”In 2018, ORANSSI PAZUZU and their Tampere cohorts DARK BUDDHA RISING, known for their grandiose slug-paced ritualist doom metal, recorded a new album, which was released on Svart Records on April 5th, 2019. The amalgam of these two entities was melted as one on »Syntheosis,« and released under the moniker WASTE OF SPACE ORCHESTRA. »Syntheosis« is based on a commissioned work for Roadburn Festival and was performed live in April 2018 in front of over 3,000 people.

As Finnish cosmic black metal collective ORANSSI PAZUZU prepares for their sophomore LP, Valonielu, to see release in less than a month, PopMatters unveils the luminous album opening “Vino Verso (Askew Sprout)”. The plodding track follows a set course, with a seemingly unwavering beat pounding solidly through the nearly five-minute anthem, yet a constant barrage of the band’s investigational riff tactics and celestial effect experimentation unwinding and uncoiling ceaselessly, the tension escalating until the implosion at the song’s crescendo.

Explore the borderless depths of “Vino Verso” at PopMatters now AT THIS LOCATION.

The innovative Valonielu will see release on CD and LP via 20 Buck Spin in North America on October 15th preceded by the European release via Svart Records on October 11th. Here the adventurous ORANSSI PAZUZU has sharpened their songcraft into succinct and salient statement, formidably invoking ’90s era Darkthrone, yet boldly reaching farther out into the multiverse of the psych and ExperiMental side they have always inhabited. Valonielu offers a vibrant, colorful cataclysm of psych, space rock and black metal that cannot be easily categorized as any one particular genre or any single influence.

Last pieces of the puzzle are all Finnish new comers: death ‘n’ roll group GHOUL PATROL, ODDLAND who are about to release their debut album via Century Media, and metalcore outfit ARTIFICIAL who were recently signed to Spinefarm Records.

UPDATE!!! Carnalation has unfortunately been forced to cancel their appearance at FME due to illness.

FINNISH METAL AWARDS
Finnish Metal Awards voting will award the best Finnish metal of 2011. FMA gala will take place at the Cable Factory Main Stage on Saturday Feb 18. You can now vote for your favorite Finnish Metal Artists at www.imperiumi.net/index.php?act=fma.

TICKETS
Tickets for the Finnish Metal Expo are now on sale at www.lippupalvelu.fi and www.tiketti.fi.

We sell one day tickets and two-day tickets.
One-Day tickets cost 35 euros in advance and 40 euros at the door (if not sold out).
Two-day ticket costs 57 euros. Advance only.

Possible ticket agency fees will be added to the advance ticket price.