When asked what both guitarists were currently up to,
“I’ve got an upcoming release from a group that we both play together in, called DC4.” Rowan Robertson

“This new DC4 Album should be out around April 2018 Springtime, it’s just good hard rock and roll music in your face.” Jeff Duncan

Jeff Duncan was asked if Armored Saint was working on a new album
“We will probably put out a new album next year 2019 from what I am told and we got a bunch of touring happening for Summer, South America the USA and Europe.”

Rowan Robertson was asked if he would release the Unreleased unheard Dio rehearsal tapes he owns
” No (shaking his head with a Yes) there is two songs which were just done on a boom box in rehearsal and I just really would like to get permission from management, cause I don’t want to get in trouble.”

When asked about Rowen Robertson’s thoughts of the Dio Hologram tour
I think it’s great, it keeps his memory alive and I don’t see any problem with it at all”

Rowan Robertson was recruited to join the band Dio when he was only 17 years of age. The experience launched the young guitarist from obscurity to international fame nearly overnight. Robertson’s first and only album with the band, Lock Up the Wolves, was released May 15, 1990

Rowan Robertson Interviewed By The Metal Voice: “Unreleased Ronnie James Dio songs might not see the light of day” 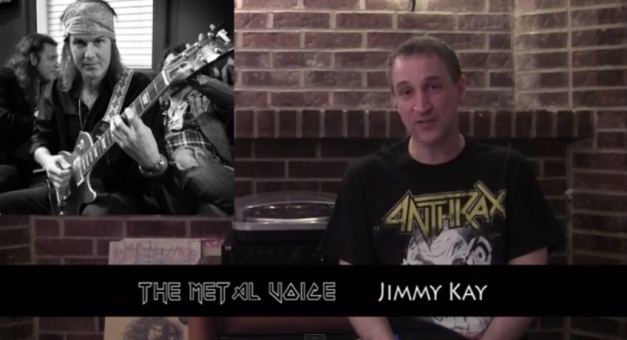 To commemorate the 5 year anniversary of the passing of Ronnie James Dio, Jimmy Kay from Canada’s ‘The Metal Voice’ recently caught up with guitarist Rowan Robertson (Dio, Bang Tango, DC4)  who played and co-wrote on the Dio Classic ‘Lock up the Wolves’ Album.

When asked about the song writing process on Lock up the Wolves.

“Ronnie used to like to work from a Riff first which usually he came to his guitar player for,  so what I would have to do come up with loads of riffs and play them one by one.  Then what we would do is play, jam the riff and sit there and stand and go  where can we take it anyone got any ideas? We would record them on a boom box and Ronnie would take them home overnight and come up with let’s say  a vocal melody or might already have titles sitting around. I remember he came in once and he said, I’ve got it title of the album LOCK UP THE WOLVES.
Ronnie wrote with the band all the time, he used to say this type of music comes from  a band in a room.”

When asked about why Jimmy Bain, Vinny Appice and Claude Schnell left the band  after the writing of the album.

“As far as the reasons for it you really have to talk to Wendy Dio cause Ronnie’s not here. It was a difficult time for Ronnie cause you could feel the change in the industry. Looking back it was obvious it was coming to an end and I think Ronnie felt the pressure in that. For some reason that Ronnie needed to make a change with the exception of Vinnie. “

When asked if there was any material recorded with Dio that has not yet surfaced during the Lock up the Wolves Sessions?

“There are two songs that I got that are Boom box recordings that didn’t make the record but I ‘ve played them for Wendy and that she said the quality isn’t good enough to release them. One was called ‘Hell wouldn’t take her’ and the other ‘The river between us’ and neither of them made the album and I know that Craig Goldy has rehearsal stuff  that didn’t make the albums that he made with Ronnie I think out of respect he is not gonna be putting them out there.”

When asked about the new documentary about Bang Tango

Former DIO guitarist Rowan Robertson filled in for Craig Goldy at the October 26 DIO DISCIPLES concert at M15 in Corona, California as Craig had a prior commitment in Russia.  Fan-filmed video footage of the show can be seen below.

In the late 1980s Robertson heard that Ronnie James Dio was looking for a new guitarist. He sent a tape to the record company Phonogram. After six months of waiting, he got a reply that stated that at that moment they were not interested in him. At the encouragement of his friend and fellow guitarist Sean Manning (HURRICANE) the tenacious Robertson then contacted the DIO fan club who then asked him to send his demo tape to them.

Robertson, who was 17 years old at the time, got a great response from DIO after receiving the demo through the fan-club channels. In late January or early February 1989 Robertson was flown to Los Angeles for an audition with DIO. He was auditioned twice. Immediately after the second audition he was invited to join the band. The press-release for the addition of Robertson to DIO was sent out on July 18, 1989 and the press was invited to meet the newest DIO guitarist on July 20, 1989 at Oliver’s Pub in New York City.

The first DIO album Robertson started working on with DIO was “Lock up the Wolves”. These sessions included Jimmy Bain, Vinny Appice and Jens Johansson. The band had already begun writing and recording when Jimmy Bain and Vinny Appice were suddenly excused from the band. They were replaced with Teddy Cook and former AC/DC drummer Simon Wright.

“Lock up the Wolves” was released in 1990, and the band embarked on a tour in support of the album.

Dio and Robertson had been writing songs for an album to be released in May 1991 which ended up being shelved. When the DIO band was put on ice, Robertson started work on an instructional video for guitar players. It was released on Star Licks in July or August 1991. He then teamed up with vocalist Oni Logan (ex-LYNCH MOB) and drummer Jimmy Paxson (from TRIANGLE) and began to write and record on an album together for Atlantic Records.

The band lineup will consist of the following musicians: