Thanks to Terrorizer Magazine, the new album from Norwegian black metallers DEN SAAKALDTE entitled “Kapittel II: Faen i Helvete” can be listened to ahead of its European release date, which comes up on May 27th (North American release is scheduled for June 10th). To stream the band’s second album in full, click here.

DEN SAAKALDTE steps out of the shadows after five long years of strengthening their dark musical identity and defining a more grim musical approach. Built upon intense and heavy emotions and featuring members of Gorgoroth, 1349, Koldbrann and Nidingr, “Kapittel II: Faen i Helvete” feels as the band’s most complete work to date. The album combines doom and black metal elements with clean vocals, spoken parts and obscure atmosphere.

The successor to “All Hail Pessimism” (2009) was recorded in Strand Studio in February 2014. 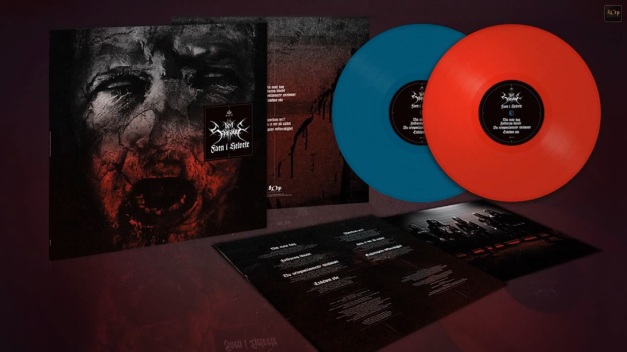 Terrorizer Magazine have presented the new ABHORRENT DECIMATION video and title track to their debut record ‘Infected Celestial Utopia’.  Check it out below:

Directed by Doug Anderson of Visceral Video who’s worked with the likes of Eye Of Solitude, Acrania, Dichotomy and Unfathomable Ruination ‘Infected Celestial Utopia’ was shot in an abandoned military barracks in Rochester, UK. “It was built to defend against Napoleon but by the time it was completed the war was over,” comments vocalist Ashley Scott (also of London death quartet Fleshrot) on the location.

Speaking of the shoot itself Ashley adds, “No one else was involved. Visually we gave a lot of freedom to Doug, we really enjoy working with him, but essentially his mandate was to go for something totally different to the ‘A Putrid Vision’ shoot, which was quite clear and polished. We wanted something a bit darker and eerie.”

“The video is essentially us getting down in a dark location, the narrative shots throughout the video show you one of the survivors of the ‘End Of Days’.

“The whole record lyrically is a set of explored metaphors about the earths journey through eradication. By the time we get to the last track ‘Infected Celestial Utopia’ we are following a single person, a religious survivor, they find safety underground with their bible. They are basically possessed by what they have seen and lose all faith. He goes on to destroy the bible and burn it as he realises the utopia he prayed for does not exist. He comes to the realisation that the infected celestial sphere we inhabit is both Heaven & Hell; there is no higher place and no divine power greater than earth itself. So we wanted to capture him throwing up, and acting all sketchy then destroying his bible and burning it.”

“We selected this track as it shows a relatively different side to us. The song is essentially more melodic, still with brutal parts and blast sections but with the weird lead guitar lick it creates a bit of an uncomfortable feeling and ‘off atmosphere’.”

Terrorizer Magazine presents a new NOCTURNAL BREED song entitled “Cursed Beyond Recognition” in the form of a video featuring available album formats. Band’s first in 7 years album, “Napalm Nights”, will hit the shops on March 11th in Europe and March 18th in North America via Agonia Records. Take a listen to the new track at Terrorizer.com.

Featuring a guest appearance of Darkthrone‘s Nocturno Culto on vocals, and former guitarist A.E. Rattlehead on guitars, “Napalm Nights” includes 10 brand new tracks recorded in Killer Studio (Norway) in 2012 & 2013. Recently re-united with the original guitarist I.Maztor, the band – including present and past members of Satyricon, Aeternus and Gehenna – is coming back with their fifth full-length release after 7 years of silence. The newest album is a punch of epic old school thrash metal with a blackened rock and roll undercurrent.

“Napalm Nights” will be available in digipack CD, limited double black vinyl in gatefold sleeves (with insert with lyrics and A2 poster), limited double military green vinyl (with insert with lyrics, A2 poster and laser-cut full color patch) and digitally. Pre-orders are available now via: http://www.agoniarecords.home.pl/index.php?pos=shop&lang=en 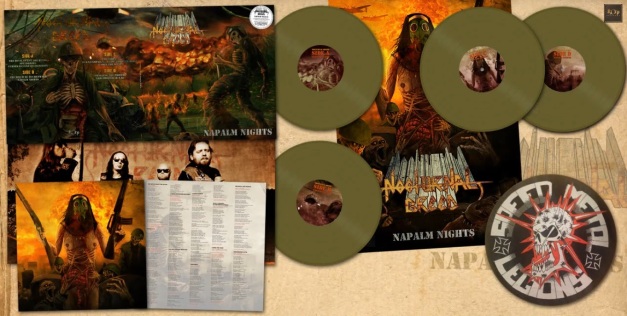 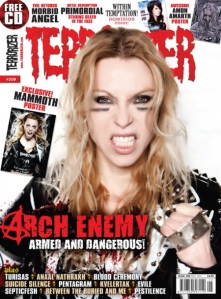 Vocalist Angela Gossow of Swedish/German extreme metallers ARCH ENEMY recently spoke to U.K.’s Terrorizer magazine about her first couple of years as frontwoman of the melodeath heavyweights, as well as offer her thoughts on the tag “female-fronted” and why metal’s rebellious nature has always appealed to her.

On the impact that bringing in a female singer had on ARCH ENEMY:

Gossow: “When I joined the band and we made [2001’s ‘Wages Of Sin’], we initially got some positive responses, but when it was finally released the whole ‘No way, it’s a chick!’ thing started, because that was actually quite new back then. So we got a lot of attention, media coverage and support through that, and we supported bands like IRON MAIDEN and NILE, and it was just surreal. I didn’t think about it much at first, but there was a lot of press that came because of me being a woman. It went in a direction that had me thinking, ‘Right, I thought we were emancipated, but now we’re back to this thing of there being a chick in a band?’ We had to consciously work against that — we’d be regretting it ten years down the line if we became established as ‘Angela And The Enemies.'”

On the term “female-fronted metal”:

Gossow: “What does it mean? That the singer has tits! [Laughs] It doesn’t say anything about the music, or the quality of the musicianship, and that’s something that we’ve always tried to sail around and avoid. It’s a bad thing for us, and other bands go well with it and it’s okay if they’re comfortable with it, but we’re not a ‘female-fronted’ band. We’re an extreme metal band, and that’s all I want us to be remembered as.”

On her kinship with extreme metal itself:

Gossow: “Metal is a type of music that deals a lot with personal freedom and rebellion, thinking for yourself and questioning authority. It’s a music that is loud and demands attention, and it’s the sound of freedom. That’s been my life philosophy in the way that I live my life, and when I joined ARCH ENEMY I made that a reality, because there’s nothing more free than being in a band. Metal is the type of music that says, ‘Go fuck yourself. This is my life and I have the basic rights to use it.'”

You can read more on Angela‘s life growing up and the band themselves — as well as grab yourself a mega-sized Angela poster — in the current issue of Terrorizer, out now.