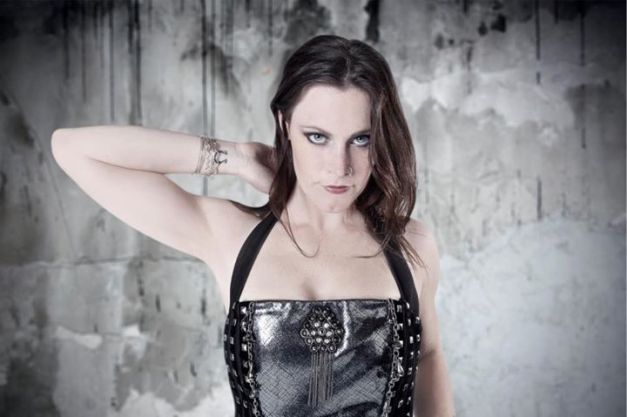 The Institute of Contemporary Music Performance has announced they will be holding a masterclass with NIGHTWISH singer Floor Jansen on the 8th December:

On Monday 8th December, the Institute is excited to welcome symphonic metal singer Floor Jansen to give an exclusive masterclass to Institute students; with a public masterclass being held the day before.

Floor started her career fronting the Dutch metal band After Forever, and now singing for NIGHTWISH and REVAMP. After graduating from one of the Institute’s International partner schools, Rockacademie in Tilburg, Netherlands, she continued studying music theatre and opera at the National Conservatory for two years. She has featured as a guest vocalist on many albums for artists such as Ayreon, Star One, Devin Townsend, and Mayan. She has also starred in live shows including Lowlands, Games in Concert, Christmas Metal Symphony, Epica, Doro and many more.

The session, for all singers, will focus on basic and advanced vocal techniques and song interpretation. It will cover techniques which are used to keep the voice healthy and strong as well as tools to make the story of a song come alive. Floor hopes to help the participants to learn more about themselves regardless of their experience and to help them to bring some new insights to their singing.

Floor has been teaching vocals since 2003 and has been running her masterclass entitled ‘Your Voice’ in the Netherlands, Sweden and Finland this year. The Institute is very pleased to offer Floor the chance to run a public masterclass on Sunday 7th December, followed by an exclusive free event for Institute students the next evening.  About her London classes, Floor commented; “I am exited to work with singers who would like to challenge themselves to find their sound, to cross boundaries while stepping out of their vocal comfort zone, to inspire and get inspired!”

The last few tickets for the public masterclass and further information about Floor Jansen are available from http://www.floorjansen.com.

For more information on this event or courses at the Institute, contact us directly: www.icmp.co.uk

The female-centric website BoxxMagazine.com has exclusively debuted the new lyric video for “Nothing,” the track off of REVAMP’s second studio album, Wild Card, which was released via Nuclear Blast last September. View the lyric video here: http://boxxmagazine.com/2014/02/exclusive-video-premiere-floor-jansen-nothing/ 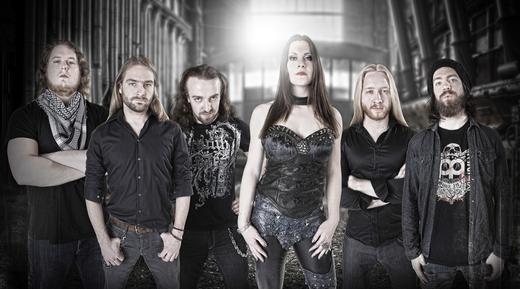 Led by the inimitable & multi-talented vocalist Floor Jansen, Dutch heavy metallers REVAMP have scheduled their maiden tour through the U.S. and Canada for this upcoming April & May, 2014. The band will open for headlining American metallers ICED EARTH on their “Worldwide Plagues” tour and SABATON from Sweden, who will be direct support. The six-week trek launches of April 4th in Grand Rapids, Michigan, includes stops in eight Canadian cities, and wraps up in Oklahoma City, Oklahoma on May 16th.

About the tour, REVAMP front woman Floor Jansen (also the vocalist for Finland’s NIGHTWISH) has stated: “We thank EVERYONE who made this possible and can’t wait to rock with all of our loyal American and Canadian fans!”

REVAMP tour dates for the “Worldwide Plagues” North American tour with ICED EARTH and SABATON are:

Pre-sale ticket links for the REVAMP tour are available from the band’s official Facebook page.

ABOUT REVAMP: Vocalist/lyricist Floor Jansen decided to continue her career and return to the metal music scene when her first band AFTER FOREVER – founded in 1999 and named after the Black Sabbath song of the same name – officially disbanded in 2009 after releasing five studio albums. Jansen joined forces with two additional songwriters to first compose then record the tracks which became REVAMP’s 2010 self-titled debut album, featuring guest appearances from Russell Allen (SYMPHONY X), Björn “Speed” Strid (SOILWORK), and George Oosthoek (ORPHANAGE, PLEURISY). A live band formed soon after the CD’s completion and performed in Europe, which restored Floor Jansen back to her rightful position on-stage. Jansen also fronts the Finnish symphonic metal band NIGHTWISH.

Dutch REVAMP has just issued the following on the band’s Official Facebook Page:

Dear fans,
Unfortunately, we are forced to shorten the Dutch tour with ReVamp, because the time doesn’t allow us to do all the January / February shows.

The good news is that we can focus on the shows we are still playing!
We hope that you want to trade the already purchased tickets for the canceled shows for one of the shows we’re still going to play!

We are looking forward to the shows and hope to see you in 2014!

New England Metal & Hardcore Festival has announced the First Wave Of Bands For the 2014 edition:

Slated for April 17th, 18th, and 19th, the 2014 installment of the massive NEW ENGLAND METAL & HARDCORE FESTIVAL gathering will mark its sixteenth year. Since 1999, the multiple-day festival has been attracting dozens of bands and thousands of fans to the historic Worcester Palladium, that houses two stages full of music for three full days.. While the final lineup for this year’s fest is still being organized, today the first wave of bands confirmed to be taking part in the three-day massacre has come in hard.

Highlights of the three dozen NEMHF 2014 confirmations as of this week include:  All That Remains, Iced Earth, Nile, Slapshot, the final East Coast appearance of Bleeding Through, Nails, All Out War, Twitching Tongues, and the 2014 Metal Alliance Tour package still to be announced, with more than half of the lineup still to be disclosed. Tickets forNEMHF 2014 will go on sale this Black Friday, November 29th, with VIP packages to follow soon after. Final lineups will be determined very soon.

Check out the Festival teaser below:

Dutch REVAMP is currently touring Europe, as the support act for KAMELOT. On November 9th in Oslo (Norway) Floor Jansen joined KAMELOT on stage to perform the song “The Haunting”. Check out the fan-filmed video footage below:

Check out below the remaining tour dates with Kamelot:

Nuclear Blast Records has issued that Praised by the L.A. Weekly for the “over-the-top symphonic sounds and boundless energy” they brought to the stage when they opened for IRON MAIDEN at the sold-out Battle of San Bernardino show in September, Swedish heavy metal superstars SABATON are returning to the U.S. and Canada in 2014 as direct support to American metallers ICED EARTH on their “Worldwide Plagues” North American tour. Opening each show of the six-week trek on their maiden North American tour will be Dutch heavy metallers REVAMP. 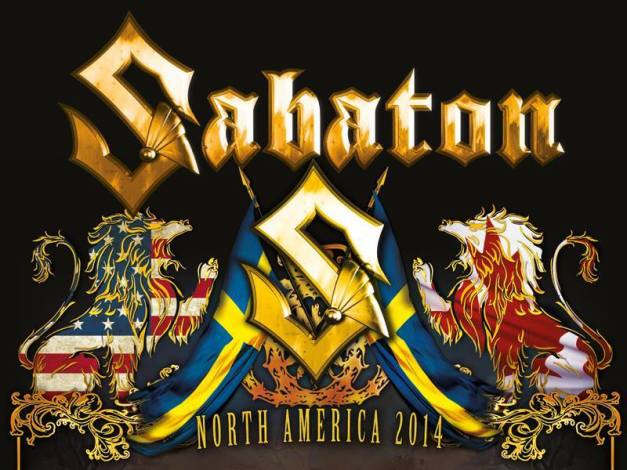 “We are really looking forward to return for the first SABATON full North American run since 2011. Three great bands on tour together, this will for sure be fantastic!”

SABATON will be out supporting their Swedish Empire Live DVD release – the band’s largest live production to date – which hit North America on October 29th. Filmed in front of 600,000+ enthusiastic fans at their headlining festival appearance at Poland’s Woodstock Festival in 2012, Swedish Empire Live captures the band’s spine-tingling, soul-soaring, high-energy live stage show saturated with fist-pumping anthems celebrating the triumph of the human spirit. Fans can order the DVD from the Swedish Empire Live Landing Page: http://bit.ly/sabatonswemplive
SABATON tour dates for the “Worldwide Plagues” North American tour with ICED EARTH and REVAMP are: 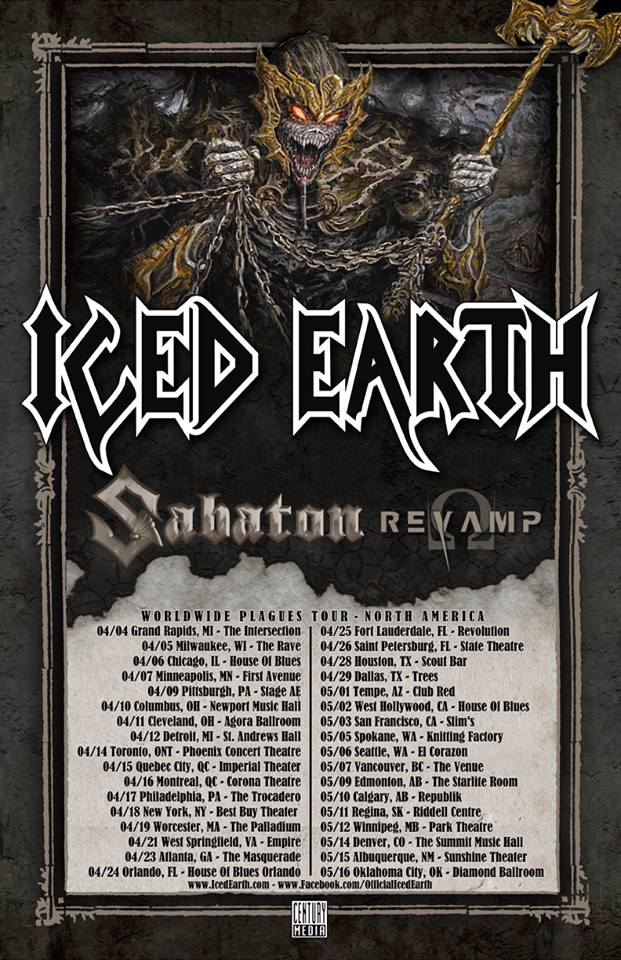 Come out and experience first-hand why SABATON are one of the most popular up-and-coming bands in heavy metal.

View the live video clip for the track “Uprising” on YouTube:

ABOUT SABATON:
Formed in Falun, Sweden in 1999, the band is best known for singing almost exclusively about historical wars & battles, a direction SABATON members decided to take on after watching the 1999 Academy Award-winning film Saving Private Ryan. “For us it means a lot more to write about historical events than to make up stories,” says bassist Pär Sundström, one of the main songwriters. The band thoroughly researches their topics to ensure the songs paint accurate & objective portraits of the historical event they’re singing about, which are narrated from an omniscient point-of-view or in first-person as a soldier caught in the line of fire. Like their home country, SABATON aims to remain politically neutral in their role as musical war historians.