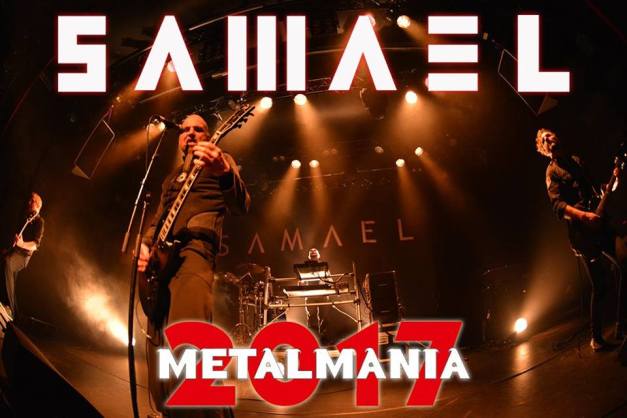 After a 9-year hiatus, the biggest indoor metal festival in Eastern Europe – Metalmania, comes back to life! The 23rd edition of this iconic festival will be held on April, 22nd 2017 in Spodek Hall, Katowice (Poland). Tickets are on sale now!
Moonspell, Sodom, Arcturus, Tygers of Pan Tang, Furia, Coroner, Obscure Sphinx, Impaled Nazarene, Entombed A.D., ThermiT, Ceti and Animations have been announced so far. Today, we can reveal names of two bands added to the line-up of Metalmania 2017: Sinister and Samael, who as a headliner of the festival will perform a very special show! More info to be revealed soon!
Samael  is a symphonic black/industrial metal band formed in 1987 in Sion, Switzerland. They are one of the most innovative bands on the metal scene, characterized by its own unique style. They expand the boundaries of genres and set new standards in metal music. Next year Samael celebrates thirty anniversary. The band will prepare a very special set for Metalmania Festival. We will hear iconic songs from their early albums, as well as compositions from the new album which is planned for release in 2017! More info: http://www.facebook.com/OfficialSamael

Dutch band Sinister  is one of the most recognizable bands on the death metal scene. In the 25 years of their career, they have released 12 albums. Their last one, “Dark Memorials”, was released in 2015. The band has an almost cult status in Poland. Their official concert DVD titled “Prophecies Denied” was recorded there. In November the band finished work on their new album “Syncretism”, which will be released in February 2017. More info: http://www.facebook.com/Sinister-14162294410/

Metalmania – it will be one of the most important musical events of 2017, a real treat for metal maniacs worldwide! Metalmania remains true to its formula – one day, two stages, several bands from all around the world and thousands of fans! That’s what Metalmania Festival is all about!

The last edition of Metalmania Festival took place at Spodek Hall in Katowice on March, 8th 2008, with Megadeth, The Dillinger Escape Plan, Overkill and Satyricon on the bill!

On Monday, October 6th (December, 2nd in North America) Metal Mind Productions will re-release selected albums taken from the discography of such classic bands as VOIVOD, SINISTER And SAMAEL. The list of re-issues includes:

All albums are re-released on Golden Discs, limited and numerated to 2000 copies. More information at: http://www.metalmind.com.pl – http://www.facebook.com/metalmindproductions

The fourteenth album by the immensely influential Canadian prog metal band Voivod! Released back in 2005, after the tragic death of the guitarist, and one of the band’s founding members, Piggy, the album was for the most part composed around Piggy’s guitar parts, which he managed to record before his passing. The album, finished by the remaining trio of Snake, Away, and Jason “Jasonic” Newstead (ex-Metallica) and produced by Glen Robinson, constitutes, arguably, Voivod’s best sounding release up to that point and features 10 compositions recorded in the unique style the band’s fans have come to cherish. 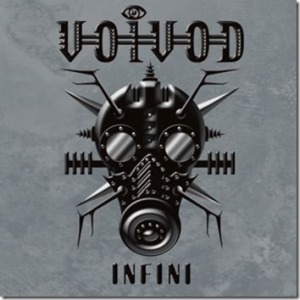 The fifteenth album by the immensely influential Canadian prog metal band Voivod! Released in 2008, “Infini” is based on demo recordings of the guitarist Piggy, one of the band’s founding members, who died of cancer before the recordings of Voivod’s previous album “Katorz” (2005) were concluded. The songs feature Piggy’s original guitar tracks in their unaltered form, and were finished by the remaining trio of Snake, Away, and Jason Newstead (ex-Metallica). A must-have for all the fans of Voivod’s unique style. 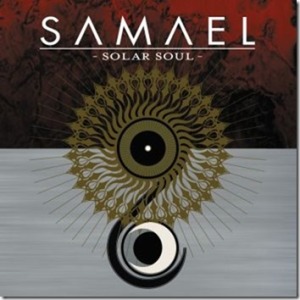 A re-issue of an album by the widely acclaimed, dark and unpredictable act from Switzerland. Assaulting the broadly defined metal scene for more than a quarter of a century now, Samael has on more than one occasion proved its wild and innovative nature, winning over the hearts of fans and the esteem of critics alike. Released in 2007, the “Solar Soul” album showed for once more the amazing artistic prowess of Vorph, Xy, Mas, and Makro. A definite must for all Samael fans. 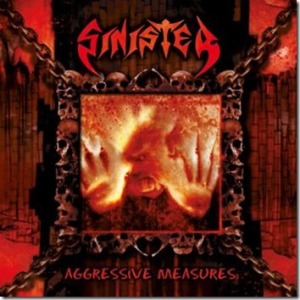 A re-issue of the fourth studio album by the death metal veterans from the Netherlands! Originally released in 1998, this masterpiece of death metal mayhem still holds up as a prime representative of the genre at its absolute best. Brutally concise and uncompromising, full of the devastating drumming of Aad Kloosterwaard (later, the band’s singer), the crushing guitar riffs of Bart van Wallenberg, and crowned with Eric de Windt’s massive and furious growl, Sinister’s ˶Aggressive Measures” must be seen as nothing less than an absolutely timeless death metal classic.

1. Upcoming
2. Aggressive Measures
3. Beyond the Superstition
4. Into the Forgotten
5. Enslave the Weak
6. Fake Redemption
7. Chained in Reality
8. Emerged with Hate
9. Blood Follows the Blood 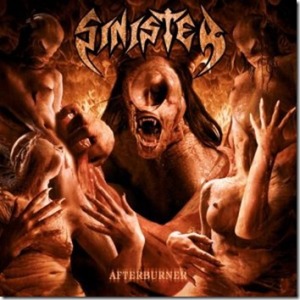 A re-issue of the seventh studio album by the death metal veterans from the Netherlands! An outstanding album marking the reunion of the band, which split up in 2004, their latest album at that point being ˶Savage or Grace” from 2003. Released in 2006, ˶Afterburner” showed the band reborn with an altered line-up, with their drummer Aad Kloosterwaard switching over to vocals, Alex Paul switching from bass to guitar, and introducing a brand new member: Paul Beltman (drums). Recorded at Stage One Studios in Germany with the producer Andy Classen, more diversified musically than ˶Savage or Grace”, though just as dark and brutal, and boasting excellent production, the album showed the band once again firmly stand their ground.

1. The Grey Massacre
2. Altruistic Suicide
3. Men Down
4. Afterburner
5. Presage of the Mindless
6. Into Submission
7. The Riot Crossfire
8. Flesh of the Servant

ONSLAUGHT, 3 INCHES OF BLOOD, and SINISTER are the latest bands to be confirmed for 70000 Tons Of Metal.

The World’s Biggest Heavy Metal Cruise will sail Monday, January 28, 2013 aboard the Royal Caribbean Majesty Of The Seas from Miami, FL to Cockburn Town on Grand Turk Island, and will not return to the real world for four days until Friday, February 1, 2013. 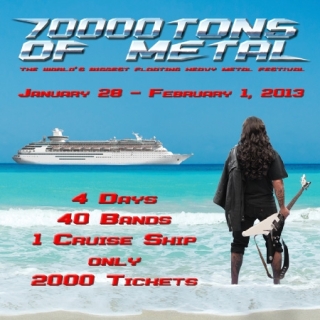 The following 30 out of 40 bands have now been announced:

Ticket prices start at US$666 plus US$299 taxes and fees per person and include all on-board entertainment, non-alcoholic and non-carbonated beverages, all meals at the dining rooms, most on-board restaurants and even 24 hour room service!

What are you waiting for? You might even need a vacation from this vacation when all is said and done! Check out 70000tons.com for more information.

Dutch death metallers SINISTER will release their new album, “The Carnage Ending”, on September 28 via Massacre Records. The CD was once again recorded at Soundlodge studios in Rhauderfehn, Germany with producer Jörg Uken (GOD DETHRONED, OBSCENITY).

The digipack version will include a bonus disc with five covers:

Audio samples of the entire album are available at this location.

Poland’s Metal Mind Productions released an exclusive box containing SINISTER‘s full discography in February 2011. Entitled “Altered Since Birth”, the set contains eight studio albums, a live DVD, a compilation of demo tracks, plus a booklet containing a full biography based on an exclusive interview, the complete discography, lyrics to all songs and a selection of amazing archive photos. The cover artwork was created by the well-known Polish graphic designer Graal.

SINISTER‘s most recent album, “Legacy of Ashes”, came out on December 17, 2010 via Massacre Records.