Bergen-based DARK ESSENCE RECORDS, the Norwegian label whose roster features not only some of the most respected and long- standing Black and Extreme Metal artists in the business, but also some of the most talented upcoming bands, showcases no less than seven of its bands at this year’s Inferno Festival. One of Europe’s foremost music festivals Inferno takes place annually in Oslo, and this year runs for four days from the 27th to the 30th March http://www.infernofestival.net 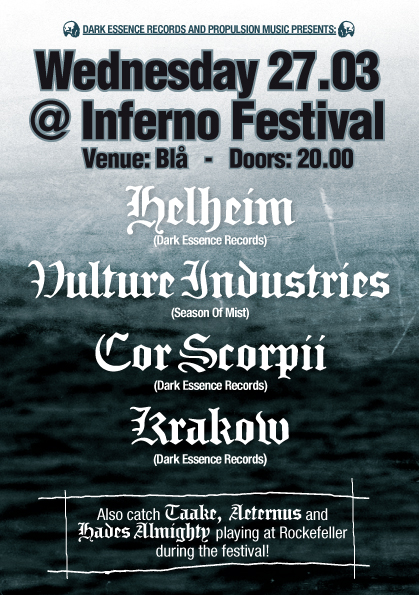 Opening night of the festival, which is effectively the club night, sees four of the bands appearing at Blå . Post Rockers KRAKOW (http://www.krakowofficial.com), whose critically acclaimed sophomore album “diin” was release in Autumn of last year, kick off the evening at 21:00, followed by Melodic Extreme Metallers COR SCORPII (http://www.corscorpii.net), who are currently working on their next album. Third band on will be VULTURE INDUSTRIES (http://www.vulture-industries.net), a band whose skilled interpretation of avant-garde extreme metal, coupled with the highly theatrical and manic performance of frontman Bjornar Nilsen, makes for a fascinating live show. Topping the bill will be HELHEIM (http://helheim.com) one of the original Norwegian Viking Metal bands who celebrate their historical roots both in their music and in the visual effects used in their live performances, and who have been together for over twenty years. Information about how to get to Blå can be found at http://www.blaaoslo.no

Thursday 28th sees another band celebrate its twentieth anniversary when TAAKE headlines on the Rockefeller stage at 23:00. TAAKE frontman HOEST will also be holding a signing session at 15:00 in the Shadowland record store (http://www.shadowland.no), Torggata 36 (200 meters from the Rockefeller). Formed in 1993, TAAKE’s contribution to the Norwegian Black Metal Scene has been considerable; with founder Hoest remaining true to his Black Metal roots, whilst still being able to breathe life and originality into the genre even after twenty years. The band recently released “Gravkamre, Kroner og Troner” (Tombs, Crowns and Thrones), a double Anniversary CD which feature exclusive new tracks as well as rare and previously unreleased material, alternative versions of previously released tracks and recordings that have, until now, only been available on vinyl. More information about TAAKE athttp://taake.svartekunst.no

AETERNUS will hit the Rockeffeler stage on Friday 29th at 19:45, a few days in advance of the release of “…And The Seventh His Soul Detesteth”, the band’s seventh full-length album.Founded in 1993 by guitarist and frontman Ares, AETERNUS has re-emerged seven years after the release of their last album “Hexaeon” with a new line up that comprises Ares on guitars and vocals, Phobos (GRAVDAL, MALSAIN) on drums and Specter on guitars. One of the pioneers of what the band calls “Dark Metal”, AETERNUS’ sound combines features from both Black Metal and Death Metal with superlative guitar playing and occasional haunting, melodic interludes. More information about AETERNUS can be found athttps://www.facebook.com/Aeternusofficial

Saturday 30th, the last day of the festival, also sees the last of the DARK ESSENCE RECORDS bands to appear. HADES ALMIGHTY will play on the Rockefeller Stage at 19:45, and, incidentally, they were one of the bands who performed at the very first Inferno Festival in 2001. Apart from the occasional live appearance from the trio of Janto on Bass and Lead Vocals, Jorn on Guitars and Synth and Remi on Drums and vocals, things have been relatively quiet since the re-release in 2004 of their 2001 classic “The Pulse of Decay”, but the band has been busy behind the scenes working on the next album. More information about HADES ALMIGHTY can be found at http://www.hades-almighty.com/

Tracks from all the releases of the above bands on DARK ESSENCE RECORDS can be heard below.