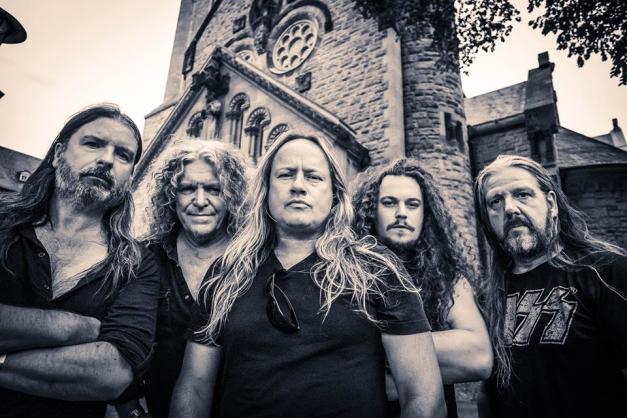 UK metallers TANK have been busy in the studio recently putting the final polish on their latest metal offering which is certain to excite their legions of Filth Hounds around the world.

“Re-Ignition” is a tribute to the early days of TANK and features 11 classic TANK songs chosen from the first 4 albums which were originally released in the early 80’s. (Filth Hounds of Hades, Power of the Hunter, This Means War, Honour and Blood).

The album will be released worldwide (ex Japan) through Cleopatra Records on APRIL 26th 2019. The Japanese release will be through Rubicon Music.

1. Walking Barefoot Over Glass
2. Power Of the Hunter feat. Tom Angelripper (Sodom)
3. Just Like Something From Hell
4. (He Fell in Love with a) Stormtrooper
5. This Means War
6. Shellshock feat. Dani Filth (Cradle of  Filth)
7. W.M.L.A.
8. Honour and Blood
9. Blood, Guts and Beer
10. Echoes of a Distant Battle
11. The War Drags Ever On

Many bands have admitted to have been influenced by TANK’s unique style of punk edged metal which was the trademark sound on the early albums. Those bands include Metallica, Nirvana and Sodom to name a few.

Mick Tucker:
Many of the songs from those classic albums are still present in our live set and we
are constantly being asked by our fans if we would ever consider re-recording any of
them. Those original recordings are timeless and will always be there but we thought
what harm can it do to give them a full metal makeover and inject new life into them.
They deserve it!

Cliff Evans:
We approached US label Cleopatra Records to see if they would be interested in
releasing the album. They jumped on it straight away and suggested the possibility of
adding some special guests on the album. Maybe some artists who were influenced
by TANK back in the 80’s. Great idea! We recruited Cradle of Filth frontman Dani Filth to record a version of ‘Shellshock’ in his own unique style and also German thrash legend Tom Angelripper from Sodom who has taken ‘Power of the Hunter’ to another insane level.

David Readman replaced former TANK vocalist and one time Dragonforce frontman ZP Theart after he was approached by Skid Row to join them on a permanent basis.
ZP recorded one album during his time with TANK (Valley of Tears) which became their best selling album since 1984’s Honour and Blood.

Prior to ZP the vocalist position was taken by former Rainbow frontman Doogie White who is now a permanent member of The Michael Schenker Experience. His contribution to TANK includes the albums War Machine and War Nation plus the bands first ever live DVD (War Machine Live!).

Cliff Evans:
We’ve always aimed high when it comes to recruiting new vocalists and musicians and
it’s always paid off. We’re very proud of the albums we’ve made with Doogie and ZP
and now this new album showcases the amazing vocal talent of David Readman.

TANK will embark on a run of shows in April 2019 when they’ll be visiting Holland, Belgium, Finland, Sweden and also their very first appearance in The Ukraine at the Volume Club in Kiev.

A full European tour is scheduled for September/October 2019 along with shows in Japan and South America.