Vancouver, Canada based UNLEASH THE ARCHERS were formed in late 2007 by vocalist and front-woman Brittney Slayes, together with her partner and the band’s drummer Scott Buchanan. Spanning the gap between various forms of metal, genre-blending has become their speciality, and the resulting product is a potent mix of intelligent song-writing and technically versatile musicianship.

Guttural screams likened to blackened death combined with the soaring wails of a four-octave mezzo-soprano in power-metal style have created a sound unlike anything else in the industry.

UNLEASH THE ARCHERS have been described as “show-stealers” and “wildly entertaining” by fans and peers alike, and they strive to put on a show that will stick with you long after you’ve left the venue. Since having signed to Napalm Records in 2015 the band broadened their fan base extensively which they will continue to do with their extended Soul-Bounding Across Europe 2021 tour.

Brittney Slayes states:
“I think it goes without saying that we are all insanely excited to see live shows start happening again.  Not being able to tour for the last year has been agony, and not just because we love playing music; we miss our fans like crazy!  We can’t wait to see all your smiling faces and hang out with you all at the shows.  We are also beyond stoked to get to play the new album live for the first time as well!  We’ve loved hearing from everyone what their favourite songs are and we just know we are going to hear your voices loud and clear on the ‘Soul-Bounding Across Europe Tour’ this winter!  See you on the road real soon!”

Main support on Soul-Bounding Across Europe 2021 will be coming from the Canadian five piece STRIKER, one of the leading bands in the New Wave of Traditional Heavy Metal movement. The Swedish/American/Brasilian Power Metal force NORTHTALE will be opening the night.

Get your copy of Abyss in physical, digital and bundle formats HERE

Canadian First-class Heavy Metallers STRIKER’s sound can be compared to modern metal music, but they still keep that old school feel. The new album City Of Gold was released this year via Napalm Records. The brand new video for the track “Start Again“ premieres on Guitarworld.com, Check it out HERE.

As a tasty appetizer for the upcoming STRIKER album City Of Gold (on Napalm Records) a brand new lyric video has been released for the albums title track.

Candian metallers STRIKER have carried on the tradition of first-class heavy metal bands for years at a consistently high level. Somewhere between Speed Metal, Maiden-twin guitar harmonies and a piece of Canada, STRIKER present themselves in a traditional but yet decidedly contemporary manner. Behold the new City Of Gold lyric video here:

Denmark thrash metal veterans will return to North America this fall for their first ever North American tour. ARTILLERY will join ONSLAUGHT and STRIKER beginning on October 23 at Saint Vitus in Brooklyn, NY. The tour will weave its way throughout North America before coming to a close at the Whisky a Go Go in Hollywood, CA on November 26. For more information, visit http://artillery.dk. 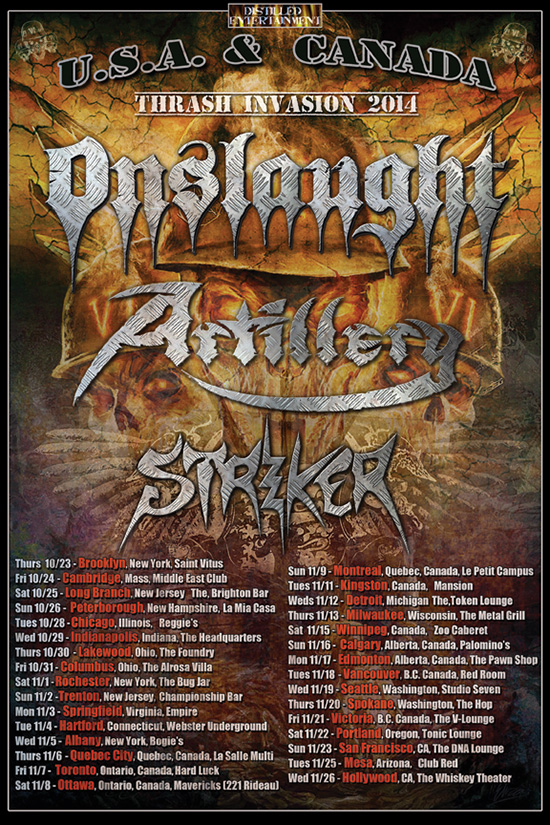 Guitarist Michael Stützer comments: “One of Artillery’s biggest goals way back since the early demo days in 1982 has been to tour USA/Canada. After a few shows in the USA, playing at Maryland Deathfest, Barge to Hell and Saint Vitus Club (in New York) we are finally doing our first full North American tour! We can’t wait to play songs from our new album “Legions” together with old classic songs like “Terror Squad” and “Khomaniac”! JOIN THE LEGIONS!“

Artillery are one of Europe’s earliest and most important exponents of thrash metal, and the band’s contribution to the bourgeoning genre is difficult to ignore. The Danish quartet successfully managed to fuse an abrasive brutality with technicality and strong melodies, with the noteworthy guitar leads of the Stützer-brothers serving as highlights. Listen to music and watch videos from “Legions” now at metalblade.com/artillery.

Artillery was formed in the Copenhagen suburb of Taastrup, Denmark in 1982 by Michael and Morten Stützer. Since then Artillery have gone thru numerous line-up changes and released six studio longplayers. The first period of Artillery‘s existence gave the World the three classic albums Fear of Tomorrow, Terror Squad and By Inheritance featuring some of the finest moments of Thrash Metal Europe has ever put out.

“Artillery are doing what they were surely born to do, namely hurling impressively intricate, ridiculously tight thrash anthems from every direction, they are still unstoppable.” Terrorizer Magazine

“The songwriting talent on display is formidable, and all the instruments turn potentially routine passages into extra appendages that work always in the band’s favor.” MetalSucks.net

“…this new album proves that they’re still fighting on, with no end to the war for thrash metal in sight.” NewNoiseMagazine.com

The Canadian Heavy Metal band STRIKER are set to release their upcoming album City Of Gold on August 29th (Europe), September, 1st in the UK & September 9th USA/CAN via Napalm Records. The band has now unveiled the artwork by artist Eliran Kantor (Testament, Sodom, Iced Earth) and announced European tour dates with BULLET in November! Check them out below.

According to The Calgary Herald, Canadian metallers STRIKER will support METALLICA at two sold-out shows on August 17 and August 18 at Rexall Place in their hometown of Edmonton, Alberta.

STRIKER landed the opening slot for METALLICA after winning a contest on radio station The Bear. There were more than 200 applicants, all sorted through by Bear music director Lochlin Cross with help from afternoon drive show host Scott McCord, who announced STRIKER as the winner on Wednesday evening.

“One reason why they stood out is that they come from the roots of where METALLICA came from, in that they have a North American twist on the early ’80s new wave of British heavy metal,” McCord explained to The Calgary Herald. “So many bands that pay homage to that do so in a wink-wink, nudge-nudge kind of way, sort of clowning around. But with STRIKER, there’s sincerity to their music and the way they present themselves. They wear straight, tight jeans, and have these gleaming white high-tops; that kind of authenticity shines through. Some bands pretend to be what they are, but these guys mean it. They’re going to make the city proud.”

STRIKER vocalist Dan Cleary had the following to say about this momentous event: “We are so stoked to be opening for a band that had such an impact on us growing up! This is insane! And in our hometown, too! This could easily be the biggest show we get to play ever, and we are so grateful! So pumped!!!”

STRIKER‘s new album, “Armed To The Teeth”, was released last month via Napalm Records. In addition, the CD “Eyes In The Night” and the “Road Warrior” EP were re-released the same month.