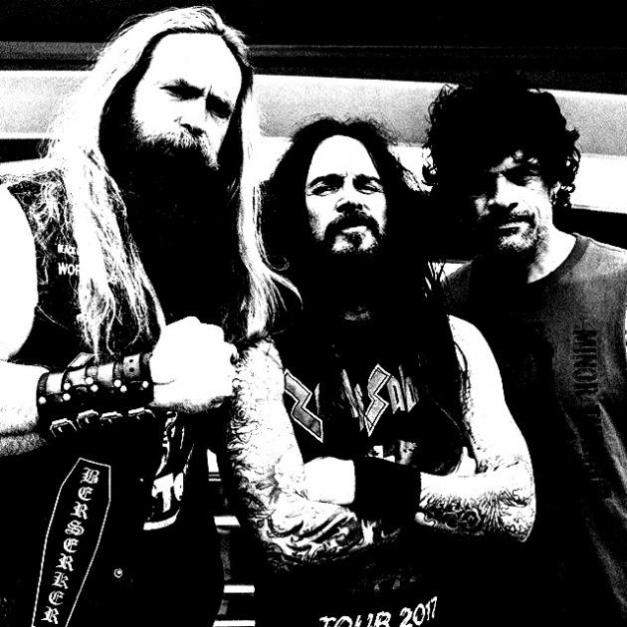 Early September will see ZAKK SABBATH, the BLACK SABBATH tribute band featuring guitarist/vocalist Zakk Wylde (Black Label Society, Ozzy Osbourne), bassist Blasko  (Ozzy Osbourne, Rob Zombie) and drummer Joey Castillo (Danzig, Queens of the Stone Age), release their spectacular tribute to the Birmingham four, a faithful yet supercharged rendition of BLACK SABBATH’s first album. Vertigo Records issued the iconic debut album on a Friday the 13th in 1970, and the world was never the same. Legendarily recorded in a single day in October 1969, the earth-moving self-titled set closed the book on hippie optimism with its dark magic and ushered in a brand new genre, setting the metal template for decades to come.

Exactly 50 years later, ZAKK SABBATH celebrate the first chapter in the Sabbath catalog with a reverently rendered tribute, simply titled “Vertigo”, which is slated for a release on September 4th, 2020, via Magnetic Eye Records. Faithfully recorded in the spirit of the original, live in the studio and with a film crew documenting the process, the session culminated in a new version of a landmark album that celebrates the greatest heavy metal band of all time and the record that started it all.

“We recorded a live EP and were wondering what we could do next as a cover band, so the 50th album anniversary came just at the right time”, explains Blasko regarding Zakk Sabbath’s decision to go studio. “Compared to ‘Paranoid’, which is almost like a best-of record, the bulk of the material on ‘Black Sabbath’ is deep-cut, really experimental stuff that was never thoroughly explored, so that was a challenge, not to forget that we wanted to meet our own high standards.”

Describing the DIY process as “very productive,” the three respectfully added their own flair to make for a slightly different flavor, also revisiting various live renditions and “extending a solo here or slowing things down because that’s what they tended to do on stage.”

Today, ZAKK SABBATH are sharing a first track taken from “Vertigo” exclusively with Rolling Stone Magazine. You can now stream their tribute version of the iconic anthem, Black Sabbath, HERE!

ZAKK SABBATH’s “Vertigo” won’t be available digitally, “to make the release feel authentic to the time when vinyl ruled the earth. It was such a cool time for those of us that grew up during that time. The fan experience with the physical product is irreplaceable with digital and streaming. We wanted to capture that authenticity.”

Set to be released on September 4th, the album pre-sale has just started at THIS LOCATION! 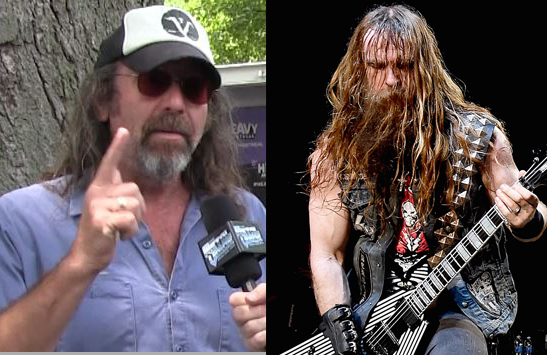 Jimmy Kay from Canada’s The Metal Voice spoke to guitarist of Corrosion of Conformity Woody Weatherman at this years Heavy Montreal festival 2019.

Weatherman spoke about touring with Zakk Wylde, plans for the next album and the upcoming Megacruise.

When asked about touring with Zakk Wylde
“Zakk is a jokester, which is cool, he also does play guitar (laughs). We kept on asking him to give us a lick of the day and he would show us something, Pepper and I don’t know what we are doing (laughs). One thing I can say about him is he will joke around all day but when it comes time to go on stage to play his guitar, he is on it, no messing around.”

When asked about an update to any potential new album
“No Cross No crown has been out a year and a half and we are still on the road but we are starting to ponder about the next one. Nothing recorded really but there is always riffs. The last record we didn’t have anything really before we went into the studio and we wrote it and recorded it as we went along and we may kind of adopt that approach again. You go in the morning there is nothing then you leave at the end of the day and there is something. Musically we always like to do something different but we are not going to come out and be the Jonas Brothers.”

With their Success of their Queen cover are they planning on doing more cover songs
“That is the topic of discussion at the moment, I don’t know about a whole album, but we have been tossing around some ideas. We had a great time doing that Queen song.”

“Sideways” is the second Single from the upcoming album, due June 28th and another bang from that splendid all-star outfit! Stream the song below.

The song is originally written by American artist Clarence Greenwood, who is known by the pseudonym Citizen Cope.

Although the song has never charted, it has been widely publicized in the pop and rock scene, amongst all on Santana’s 2002 album Shaman. Then Citizen Cope included it in his 2004 album. It has since been covered by artists such as Sheryl Crow and Corey Taylor.

GENERATION AXE are adding another layer to that fantastic song and lifting it up on a totally new level!

Generation Axe: The Guitars That Destroyed The World (Live In China) will be released as a CD Digipak, Limited coloured 2LP+Download and Digital on June 28th, 2019 on earMUSIC. 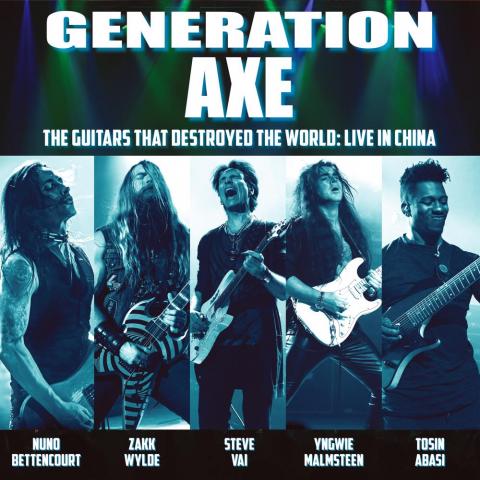 This is the first song to be previewed from the soon-to-be-released album ‘Beauty Re-Envisioned’, which will contain an extremely wide variety of remixes and alternate versions of many of the tracks that appear on their debut album ‘Finding Beauty in Chaos’. Both albums are produced by Ministry‘s Grammy-nominated producer Michael Rozon at Ciravolo’s own SAINTinLA Studio.

This track breaks the constraints placed on the debut album, not only due to the addition of synthesizers, but also in the wicked unleashing of blistering guitar solo by guitar guru Zakk Wylde. “Zakk plays more notes on this solo than I did on the entire album, but with taste, technique and a ton of flair,” Michael Ciravolo laughs.

For this project, Ciravolo – a New Orleans native – teamed up with King’s X’s dUg Pinnick, who previously lived in Houston, sharing experiences and memories of the chaos caused by Hurricanes Katrina and Harvey. Additionally discussing the ‘beauty’ of those who came to help the victims, profoundly shaped the song’s music and lyrics.

“When Michael sent me the music and asked me if I would sing and play on it, I immediately said yes. I think it rocks!! And some deep lyrics were my thoughts. Since I come from Katy Texas, where it flooded a few years ago very badly and, not very far away, it was the same for New Orleans, I thought it was appropriate to sing about the un-natural disasters that are happening due to man’s ignorance,” says dUg Pinnick. “It was fun putting my bass part on the track and a big surprise being on the same song with Ice-T and Zakk Wylde. What a great opportunity, I’m glad to be a part of this project. And the video shoot was wet!! Lol! And so much fun… and even captures the serious topic of this song.”

Ice-T, famed rapper, actor and front-man of Body Count, also spits out a poignant exclamation point to the extent of these tragedies. “This song really hits close to home as I was born and raised in New Orleans. I lived in Los Angeles when Katrina hit, but watched as friends and family lost everything. My elderly Aunt was evacuated as the city’s services shut down, and sadly she did not survive the move to Alabama. She along with at least 1200 others lost their lives as a result of this devastating hurricane,” says Michael Ciravolo.

Vicente Cordero, who directed the accompanying video, also directed the three previous Beauty In Chaos videos, delivers a visually stunning interpretation of this song. Production credit for all four goes to Industrialism Films.

Originally from New Orleans and now based in LA, Michael Ciravolo has played guitar in Human Drama for the past 30 years, most recently on ‘Broken Songs for Broken People’ (2017). Perhaps best known as President of Schecter Guitar Research, he has also played live and recorded with Michael Aston’s Gene Loves Jezebel since 1998.

On June 21, ‘Beauty Re-Envisioned’ will be released via LA-based label 33.3 Music Collective on deluxe CD and limited-edition heavy-weight colored vinyl. It will also be available digitally across online stores, including iTunes, and streaming platforms like Spotify. CDs and vinyl can be ordered from the Beauty in Chaos website at https://www.beautyinchaosmusic.com/music-store.

For this superb project, the exceptional musician assembled the collective epitome of world-class rock guitarists by his side. Part of this group are, besides Vai himself, legendary guitar heroes Yngwie Malmsteen, Zakk Wylde (Black Label Society/ Ozzy Osbourne), Nuno Bettencourt (Extreme) and Tosin Abasi (Animals As Leaders).

After joining forces in 2016, Generation Axe toured North America in April and May 2016, and Asia in April 2017. Following the vast support, in  November and December of 2018 they performed an additional 32 city tour of North American tour.

The Generation Axe experience goes way beyond simply gathering five guitar greats on one stage to jam. According to Steve Vai, “The idea was to create a seamless show with one backing band and 5 completely accomplished and astonishing guitarists that take to the stage in various configurations, performing some of their solo music and merging together as cohesive co-creators of lushly orchestrated guitar extravaganzas.”

“Generation Axe: The Guitars that Destroyed the World (Live in China)” record was culled from various performances on their last and very successful tour of Asia and marks a historical moment in music history!

Generation Axe: The Guitars That Destroyed The World (Live In China) will be released as a CD Digipak, Limited coloured 2LP+Download and Digital on June 28th, 2019 on earMUSIC.

The first single “Frankenstein” can be streamed and downloaded here: https://GenerationAxe.lnk.to/Frankenstein

Every song on Disney Super Guitar is a Disney classic updated to appeal to both guitar fans and Disney fans alike, and all songs are powered by a backing band comprising guitarist John Bruno, drummer B.J. Zampa, bassist Chris Vescera, and keyboardist Michael Vescera (Chris’s father), who co-produced the record with the album’s mastermind, renowned producer Death-Rider.

“Disney Super Guitar is a natural follow-up to our first guitar-powered Disney release, which was Metal Disney” says Death-Rider. Metal Disney was released in 2017 and peaked at #1 on Amazon’s Metal chart.

The guitar virtuosos on Disney Super Guitar enjoyed re-imagining famous Disney tunes in their own ways. For example, Grammy-winning guitarist Tak Matsumoto, who has sold over 80 million albums with his rock duo, B’z, takes “When You Wish Upon a Star” to new heights with a soaring, overdriven lead guitar rendition of the main theme — a theme that reappears later in the song as a down-home blues epilogue. “Everyone knows this beautiful melody, and I tried to express it in my own way,” says Matsumoto. “I am so honored to be a part of this album. I hope you enjoy the guitar sound from Fujiyama country!”

Meanwhile, Zakk Wylde gives “Beauty and the Beast” a brutal metal touch. “Originally, it was a beautiful, dreamy piece,” says Wylde. “Now, it’s a cruel nightmare. I take pride in that.”

“Hellfire” finds George Lynch performing the song’s main melody note-for-note in some places, yet, at other times, veering off into adventurous guitar approaches. “I mixed in everything from Roy Buchanan and Jeff Beck tricks to pick swipes and vibrato-bar moves,” says Lynch. “I threw in everything but the kitchen sink.”

Paul Gilbert took direct inspiration from the title of the song he chose. “I played electric guitar on ‘Under the Sea,'” he says. “To create an under-the-sea sound, I operated my wah-wah pedal as quickly as possible while playing my guitar parts.”

or via iTunes –  Amazon.