Frontiers Music Srl is pleased to announce the release of the hotly anticipated fourth studio album from CRAZY LIXX. The self-titled album will be released on November 7th in Europe and November 11th in North America.

Just like every Rock band does at some point in their career, CRAZY LIXX thought it was the right time to release their Self-Titled album: the kind of album that really does the band’s name justice and that shows everyone what the band and their music is really all about. This is that album for Sweden’s CRAZY LIXX.

Says lead singer and producer Danny Rexon, “We were discussing possible titles for the album and we didn’t really feel like any of the suggestions were quite right. Then I came up with the idea of a making it a self-titled album and we all agreed this was the right time for one. You know, bearing the very name of the band, a self-titled album does have a lot to live up to, but we all felt that this album has what it takes to represent the band as a whole, both in terms of the songs, the sound and the performance.”

With their new album, CRAZY LIXX show their growth as a band by sinking their teeth into 11 anthemic rock songs that will satisfy both the hardcore Lixx fans, as well as all fans of melodic hard rock and hair metal in general. By combining the strategies of recording and producing the album themselves along with utilizing the mixing skills of the great Chris Laney, the band has once again returned to the bombastic sound of CRAZY LIXX’s earlier work while at the same time adding the improved song-writing and musicianship of today’s CRAZY LIXX.

“We learnt a lot through the years, especially when it comes to the recording process and we put all that knowledge and experience to use on this album. We used many different studio settings to record different parts of the album and did not rush the recording, but made sure everything was as good as it could get. At the same time we did not want to be too nitpicking with details, I mean we’re still in the business of rock n’ roll, right?”, adds guitarist and co-producer of the album Andy Zata.

In addition to returning to the old CRAZY LIXX sound, the band has also re-recorded fan favorite “Heroes are Forever” which was originally on the band’s first, now out of print album. “It’s this one song, that was our first single back in around 2006, that we’ve played on almost every live show we’ve done since then, but when we started to think about it, it was a song that a lot of our fans had no chance to ever listen to. The first album, ‘Loud Minority’, was released on a minor independent label, in a limited printing which has long since sold out, and it isn’t available digitally either. Still we felt that the track was one of those songs that had a really fundamental CRAZY LIXX vibe to it, so we decided to record it again and give the fans a nice treat. If you ask me, it came out way better this second time around,” says drummer Joél Cirera.

Newest and youngest member, bassist Jens Sjöholm adds: “Being my first album release with Crazy Lixx I don’t really have any special expectations, but hearing the final result and seeing how fired up the guys are about it makes me look forward to seeing the reactions of the fans and media.”

With the addition of Jens Sjöholm and the return of original drummer Joél Cirera, CRAZY LIXX Mk III proved to be the best lineup to date, both in concert and on record. “I think the fans will really enjoy what we’ve got in store for them with this album. Killer songs, great sound and memorable hooks combined with a bit of the twin guitar action and riff-based approach that we added to the sound on our last album,” says guitarist Edd Liam.

“It’s really a bit of a do or die, no guts, no glory situation – after all, you only get one chance to do a self titled album, so make sure you do it good,” concludes Danny Rexon.

You can enjoy the first samples from the new album by clicking on the following link:

Sammet promises an even more celebrity-filled show, which says a lot since previous performances have included such names as Kai Hansen, Michael Kiske, Jørn Lande and Bob Catley. This will be Avantasia’s only show in Sweden for the summer of 2013.

HYPOCRISY, SATAN, NINE BELOW ZERO are the latest act confirmed for Sweden Rock Festival 2013. This will be the band’s only show in Sweden next summer.

German thrash legends KREATOR are the latest act confirmed for Sweden Rock Festival 2013. This will be the band’s only show in Sweden next summer. 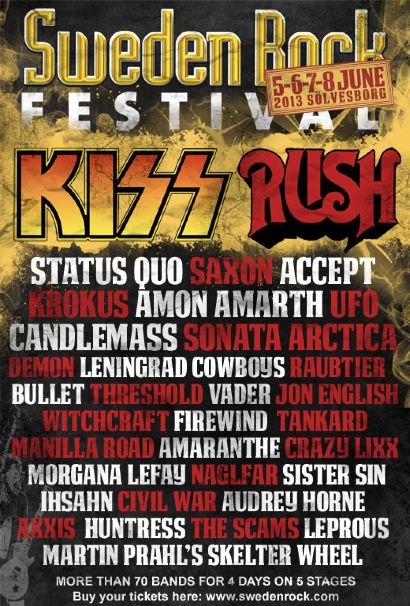