According to the Mayan calendar the world was supposed to end today, so if you’re reading this it’s safe to assume the Mayans were way off base. Just as well, too, because GMM2013 will shake Dessel to its foundations and we’ve got 15 new confirmations to help us do just that: Korn, Bullet For My Valentine, King Diamond, Testament, Hellyeah, Ghost, Katatonia, Caliban, Moonspell, Unleashed, Entombed, Red Fang, Amaranthe, Veil Of Maya and Varg.

Our best season’s greetings and a fantastic start to the new year!

About the new names:
With King Diamond we’re adding a legendary band to our 2013 lineup. The Danish heavy metal band around the eponymous lead singer arose in the mid-eighties from the ashes of another legendary metal act called Mercyful Fate and quickly rose to prominence. King Diamond’s 30+ year musical career is one of the most storied in history of heavy metal, but the tale is not yet over! The most receKingDiamondnt release, 2007’s Grammy nominated album ‘Give Me Your Soul … Please’, stands as one fo the most critically-acclaimed albums in an already iconic discography. You will be treated to the largest and most involved stage production in the band’s storied history. Horror concepts from multiple albums will be used in the décor! Feast your eyes and ears on this creative centipede at GMM2013!

Korn and Bullet For My Valentine need no introduction and we’re pleased to welcome these three household names back to our festival. Why? Because they’re popular as hell, they enjoy playing here and they deserve it. Welcome back guys!

Red Fang is a catchy heavy stoner rock band. After several successful tours supporting Mastodon and a first headlining tour in 2012, these guys are more than ready to make their mark on the major European festival stages.

For thirty years, the mighty Testament has been a tower of strength in the thrash landscape. Ever since the release of their epic debut ‘The Legacy’, the band around Eric Peterson and Chuck Billy has been a force to be reckoned with. Five years after their last GMM performance these thrash pioneers are back to treat us to the best of three decades of uncompromising thrash.

VARG, HALLOWS DIE, LEAVE THE LIVING are the featured guests on episode 20 of Extreme Metal Television.

Extreme Metal Television creators commented: “This is the final episode of 2012. Thanks for a great year everybody, we have had a blast and we hope you all have a safe and happy holiday! Make sure to watch the outtakes at the end of the show, as you will see extreme metal is serious business.”

Watch the episode below: 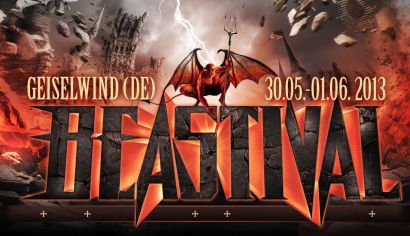 Nuclear Blast announces that yesterday WINTERSUN’s North American tour with Eluveitie & Varg kicked off in Tempe / Arizona. It was a great, nearly sold out show that thrilled both the band and the audience. The tour through the USA and Canada will continue until December 21, with the show in Ottawa, Canada already being sold out and more gigs close to be sold out!

The band comments:
“The shows on our current North American tour are selling out fast! There are no more tickets available for our show in Ottawa, ON on December 14th. Montreal and Calgary are almost sold out as well, and Los Angeles and Oakland CA are getting there too – get your tickets now if you don’t want to miss out!”

Moreover, WINTERSUN are already confirmed for Beastival, Metalfest and Tuska Open Air in 2013.

CHILDREN OF BODOM are now confirmed to play the Kivenlahti Rock 2013 in Espoo, Finland on June 7th. Go to this location for event details.

The band was recently confirmed for Metalfest Loreley 2013, which is scheduled for June 20th – 22nd, 2013 at St. Goarshausen (Rhine Gorge), State Rhineland-Palatinate, Germany.

More details can be found here.

Word came down on November 12th that Children Of Bodom have cancelled their scheduled appearance at the Tuska Open Air 2013, scheduled for June 28th – 30th in Helsinki, Finland. Bassist Henkka T. Blacksmith issued the following statement:

“We’ve been waiting to play Tuska for some years now. It is our home festival after all. Unfortunately this year we have to sacrifice a couple of festivals in Europe in order to be able to be part of a big tour in USA. These are not easy nor nice decisions. We only can hope we can do Tuska in the near future again. Please stay tuned for our schedules for summer 2013. Fortunately we are able to play shows in Europe as well. Looking forward!”

“Headlining will be none other than mighty ALESTORM who have left no stone unturned in the past couple of years with their hefty brand of pirate metal! Russians ARKONA also know exactly how to get a good heathen party started – they will bring along their new live DVD. Swedes THYRFING have been around since 1995, and their pumping viking metal is the stuff of legends. The guys will have their new album ready in time for tour kick-off!

EX DEO from Canada are much more than just a KATAKLYSM side-project – their second album Caligvla recently mingled epic death metal with hymnic character impressively. WOLFCHANT, on the other hand, stand for epic pagan metal from Germany. The band is currently working on the successor to Call Of The Black Winds and will blast out new songs at the Paganfest! Opening will be Hungarian act BORNHOLM who fuse black and pagan sounds in order to tear your heads off with new album, Inexorable Defiance!

As special guest at all extended shows VARG and the newly confirmed KALMAH will appear! Kalmah are back to show their elaborate melodic death metal to the masses! The quintet from Oulu has just finished the songwriting for their seventh studio album. They plan to enter the studio in January, so you can be shure to listen to new Kalmah songs at Paganfest 2013!”