Last Saturday Hungarian modern metal band AWS performed their anthem “Viszlát nyár” (watch the video below) at the 63rd Eurovision Song Contest, in Lisbon (Portugal), as only metal entry of this year’s edition.

“Our victory in the Hungarian preselection show A Dal showed that the metal scene can achieve great things when it comes together. We are grateful for all the support we got from the scene ever since we first appeared on the show” – says guitarist Bence Brucker. And support from the scene just kept on coming. A few days before the first semi-final of the contest, the organizers of Wacken Open Air festival contacted AWS and helped to get the band’s message to their massive audience. But the real surprise came only at the press conference after the semi-final performance, where the band was told that they are invited to perform at this year’s Wacken Open Air.

“This opportunity is a dream come true for us. We always fantasized about W:O:A, but never thought that we actually get the chance to play there as a band with lyrics mainly in Hungarian. But it is happening now, and we are super excited, it is a huge thing for the band, but also for each one of us as metalheads” – said singer Örs Siklósi.

So, even if AWS reached only the 21st position, the band already won with taking part in the Eurovision Song Contest. Congrats!

AWS stated, after the contest:

“We are very grateful for all the support, all the votes and for standing by and helping us.
We achieved much more than we expected, we got much more positive energy than we could have thought! Good news is: we have no time to stop! The upcoming shows, the new album and other surprises are on their way! And now we can finally get back to where we really belong: to smoky bars – back to you, where we feel good. THANK YOU VERY MUCH FOR EVERYTHING!“

The biggest heavy metal event will happen this week, Wacken Open Air celebrates its 25th Anniversary on the unholy soil in the North of Germany. Nuclear Blast has recently announced that some of their artists ‘s performances on W.O.A. will be available for live stream online. The bands and the dates are:

To watch the live streams, check out ARTE TV. Also an additional stream of the AVANTASIA show will be available on 3Sat. 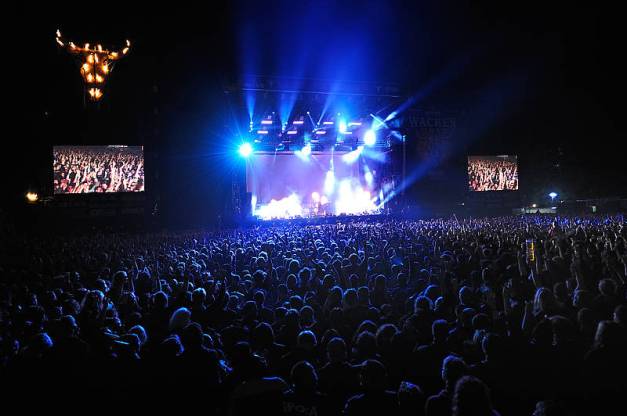 NIGHTWISH‘s August 3 performance at the Wacken Open Air festival in Wacken, Germany will be professionally filmed for a concert DVD and Blu-ray, tentateively due next year.

Says NIGHTWISH mastermind and keyboardist Tuomas Holopainen: “The time has come soon to wrap up the magical & memorable one-and-a-half-year ‘Imaginaerum World Tour’ 2012-2013! We still have three shows left, one of them being at the legendary Wacken Open Air metal festival on the 3rd of August. This show will be something extra special, since it will be released later this year on DVD/Blu-ray, together with a massive ‘Imaginaerum World Tour’ 2012-2013 documentary. Our darling flying Dutchwoman, Floor Jansen, has been nothing but incredible during her time in NIGHTWISH on this tour, so this is a perfect opportunity to immortalize the current vibe of the band on film!”

In a recent interview with Ghost Cult Magazine, former AFTER FOREVER frontwoman and current REVAMP vocalist Floor Jansen — who has been performing with NIGHTWISH since last October as the band’s touring singer — was asked if she would be willing to front NIGHTWISH permanently if she were asked to fill the slot.

“I’ve been asked to fill in for the current world tour and for a couple of festival dates, but what will happen after that is still unclear,” she replied. “NIGHTWISH will take a break after the current touring cycle and they’ll make a decision next year. Until then, everything is still up in the air.”

She continued: “If they would ask me, I would be very flattered and I would love to do it. It will be a major overhaul in my life and my career as a singer, but then again, we’re not rushing things.

“Both the guys in NIGHTWISH and I have experiences with previous band breakups and all emotions that come with it. It’s almost like dating. Things feel good and it’s going well, but we’re not in a rush to tie the knot, so to speak.”

Regarding how she looks back on her experiences as a stand-in singer for NIGHTWISH so far, Jansen said: “It’s still too early for me to really reflect on the whole NIGHTWISH adventure, because there are still a couple of tour dates pending, including some summer festivals.

“What can I say? It’s an incredible ride and it feels really good. Things went really well from day one. The timing was really awkward, because Annette Olzon just left the band and there wasn’t really time to rehearse with the other NIGHTWISH members. Anxiety levels were running high, because replacing a female singer mid-tour is a hazardous experience, to say the least. They were running the gauntlet to make sure that none of the remaining tour dates had to be canceled. They were scared and so was I.

“It doesn’t matter where you perform, YouTube will be plastered with movies of the gig the next day, so I really gave it my all. Everyone in the band and crew were really supportive and all the positive reactions and the warm acceptance by the NIGHTWISH fanbase was beyond my wildest dreams.

“Some people would rather see someone else fronting the band, but you can’t please everyone.”

Jansen made her live debut as the frontwoman of NIGHTWISH on October 1, 2012 at Showbox Sodo in Seattle, Washington following the abrupt departure of the band’s lead singer of five years, Anette Olzon.

Holopainen has known Jansen for more than 10 years already, having previously toured with her former band, AFTER FOREVER.

Asked about the reasons for Olzon‘s sudden exit from the group, Tuomas told U.K.’s Metal Hammer magazine: “I’m sure it came as a shock to everybody. We came out with a statement [regarding the split], which pretty much says it all. It still is a private matter, and that’s all we wanna say about it, like, ever. It was an amicable divorce, so to say, and made in good spirit, and we are just looking to the future. There really is no reason to go back into all the details and all that. I mean, this is not politics, this is a rock band.”

Regarding whether there is a chance that Floor will become the official new NIGHTWISH lead singer, Tuomas said: “The way that we have decided is that we’re gonna continue with her until the end of the festival season in 2013 — just have fun, just do the shows the best we can. I mean, the atmosphere in the band is so good at the moment, [we want to] just enjoy this what we have right now. They try not to think about NIGHTWISH at all for a few months. Everybody take a little vacation. And we already have the rehearsal place for the next album booked in 2014 — from July to September. So that’s how far we have planned. But when we do the last festival show next August, after that, it’s gonna be total nothing for a few months. So I would say everything is possible, but that’s really not the thing that we want to be thinking about right now, because there’s absolutely no reason to.”

Organizers of next year’s sold out Wacken Open Air Festival – which will take place August 1st – 3rd in Wacken, Germany – have launched their annual X-Mas Calendar 2012 which will announce a band (or bands!) daily until December 24th. Today’s (December 24th) bands are MOTÖRHEAD and ALICE COOPER . 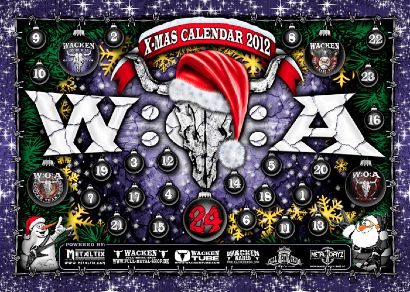 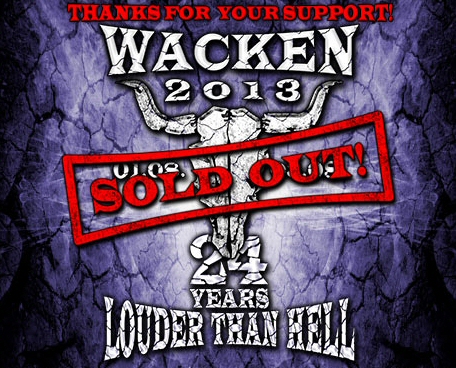 Organizers of next year’s sold out Wacken Open Air Festival – which will take place August 1st – 3rd in Wacken, Germany – have launched their annual X-Mas Calendar 2012 which will announce a band (or bands!) daily until December 24th. Today’s (December 23rd) bands are GRAVE DIGGER, AS I LAY DYING .

Organizers of next year’s sold out Wacken Open Air Festival – which will take place August 1st – 3rd in Wacken, Germany – have launched their annual X-Mas Calendar 2012 which will announce a band (or bands!) daily until December 24th. Today’s (December 16th) band is TRIVIUM.